According to EWN, Growthpoint’s Etienne de Klerk has said that while still in the early days, they are in the planning stages for new developments. I find this confusing as the developments he mentions were already on the cards before the sale of the V&A Waterfront, and to some extent had clearly gone beyond the planning stage. As far as I understand Growthpoint has inherited these developments, which were announced as early as 2010.

Let’s have a look at some of these: 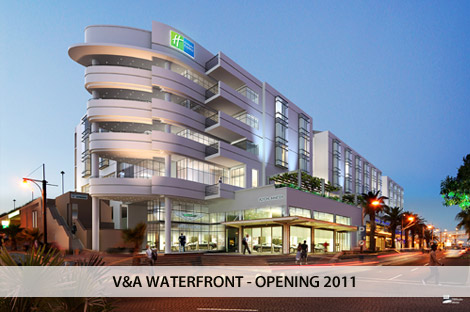 It was officially announced on Wednesday that ISO Leisure Holdings (Pty) Ltd (“ISO Leisure”) will be launching its sixth Holiday Inn Express in South Africa, in the heart of South Africa’s most visited destination, the V&A Waterfront.

The three-star hotel will bring modern and affordable comfort to the area, which has traditionally been populated with predominantly four and five-star accommodation options.

Operated and managed by ISO Leisure Hotels (Pty) Ltd, this new development will cost in the region of R250-million and stimulate further employment in the Western Cape. The hotel will offer 222 rooms, all of which will be equipped with individually controlled air-conditioning, high-speed Wi-Fi access and satellite TV, as well as a conference facility which will accommodate up to 150 people.