At a recent Cape Town Design Network event, Khalied of Jakupa Architects presented the concept of iconic ideas rather than iconic structure, particularly in reference to a recent article by Guy Lundy and Mokena Makeka, which sought to challenge the conservative, and at times restrictive thinking around architecture in Cape Town. The talk focussed on the key areas of Housing, Mobility and Icon and presented the works that Jakupa Architects have delivered and are currently delivering under each theme e.g. the Pelican Park housing project, Green Point Elevated Circle and the firm’s extensive work on Non Motortized Transport around the City of Cape Town.

The concept of iconic ideas and thoughts uses the Green Point circle as an example of providing a good solution to what was initially planned to be an iconic bridge leading pedestrians from Western Boulevard into Cape Town Stadium. The result may have been competing iconic structures, as seen in cities elsewhere in the world. Instead the focus on a single and largely level pedestrian space approaching the spaceship-like stadium represents instead an iconic idea and solution. Practically, a “Calatrava-esque” bridge would have required 60m of lead space to accommodate the amount of spectators using the bridge and those using wheelchairs, which given the constrained spatial parameters of the already awkward site, may simply have been unfeasible.

In terms of Mobility, once again, the weak integration of the “Integrated” rapid transit system was raised as an issue, with particular reference to the NMT project of the city running almost independently of the broader IRT project.

The description below from the Jakupa website provides a brief overview of the presentation.

At Future Cape Town we urge you to contribute to the debate via our website/blog and through all forms of media.

“design is perspective – the value of space thinking” 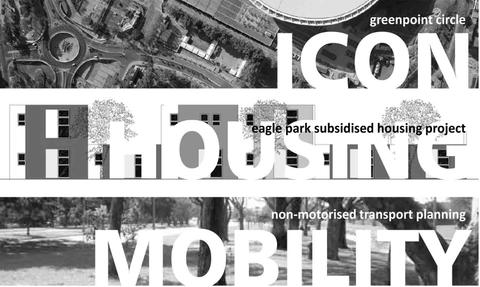 Khalied delivered a presentation titled “design is perspective > the value of space thinking” at a Cape Town Design Network design event: Cape Town Spaces – Cape Town Places: How Design Transforms the City [ http://www.ctdn.co.za/event.html ]. He used the work of Jakupa Architects and Urban Designers to discuss key debates raging in the city. He argued that the role of iconic design in the making of cities should be used judiciously and that the power of iconic structures does not necessarily rest in the “image” but in the idea and its meaning. He demonstrated the idea of co-production through their Eagle Park subsidized housing scheme and argued that great design doesn’t necessarily rest in designers acting in isolation and that depth in meaning is often built in layers by multiple participants over time. Finally, in the light of the IRT system being rolled out in Cape Town, he used Jakupa’s Non-motorised Transport [NMT] projects to discuss the ability of design to offer an alternate perspective to technocratic and linear thinking in the making of movement systems through “space thinking”.