It’s not rocket science. Construct temporary seating, the “scaffolding kind”, around a basketball court (or field of play) and include all the necessary amenities required for hosting an Olympic event. Wrap it up in a steel and fabric structure, which is easily installed,  and can be relocated to different venues. The result is the London 2012 Olympic Basketball arena which seats 12,000 and can be relocated to other cities or sites in part or as an entire arena.

The concept of a temporary arena has been mooted before as part of previous Olympic bids by various cities e.g. Paris 2012 proposed up to 7 temporary indoor arenas. Proposing a venue of this nature and actually executing one, is a different story. In this regard London 2012, alongside a team of architects, planners & engineers, is a pioneer in developing and constructing one potential solution for avoiding white elephants after an Olympic Games. Given the cost, the entire business model may not yet be optimal, but it provides an important case study for cities hoping in future to avoid white elephant venues and facilities.

The Basketball Arena design team was lead by Sinclair Knight Merz together with Wilkinson Eyre and KSS. It has already been hailed by many, as a template for the future. 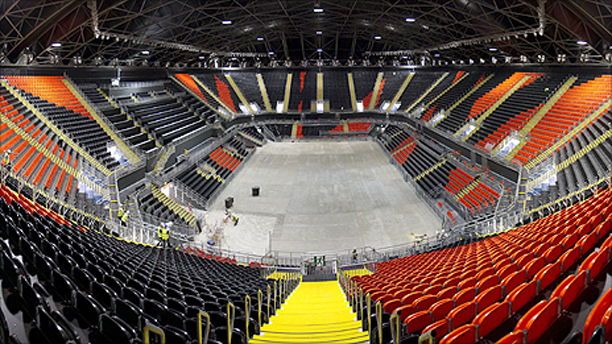 The Basketball Arena is one of the largest temporary venues built for an Olympic and Paralympic Games, after the Games it will be reused elsewhere. Construction began in October 2009, with work to erect the 1,000-tonne steel frame starting in March 2010. Building works are now finished within budget, making it one of the quickest Park venues to finish construction.

Olympic Delivery Authority (ODA) Chief Executive Dennis Hone said: ‘Completing construction on the Basketball Arena delivers another striking Games-time venue for the Olympic Park and an innovative structure that can be re-used elsewhere after 2012. As the fourth Olympic Park venue completed and one of the quickest to finish construction, the Basketball Arena is another milestone for the Olympic Park ‘big build’ and a tribute to the companies from across the UK involved in its delivery.’

The venue will now be handed over to the London 2012 Organising Committee to carry out overlay works to get the venue ready for the first Olympic Park test event in August.