ANDREWBORAINE.COM | THE ABC OF THE EDA | WESTERN CAPE

What will the EDA do?

The EDA will be a partnership-based organisation that will lead, coordinate and drive the regional economic growth, development and inclusion agenda through:

This month’s Innovators interview, produced in partnership with Hunter Douglas, features an edited version of a discussion between Zaha Hadid and Architectural Association School of Architecture director Brett Steele

Architecture is for well-being; it should be enlightening and should make you feel good. I don’t think you are supposed to just go to a place to contemplate the end of the world. – ZAHA HADID

How do you create a solid and open framework that can satisfy the wishes and needs of 57 cultures and thousands of individuals?

The project is not a finalized art piece but an open creation that will receive content and shape throught the diologue with the users. The choice of colours and materials begin as neutral to language and culture but acquire a meaning over time as they are used in the cityspace and populated by the inhabitants.

Brazil’s newest law will direct 15 percent of revenue from traffic fines towards programs that encourage bicycling. Photo by marcel maia.

After Brazil’s President Rousseff created Way to School, a national program that provides 100,000 donated bikes and helmets to students in public schools, the federal government took another important step to encourage the culture of cycling in the country.

Earlier this month, the  Bicycle Program Brazil (PBB) bill was approved by the Urban Development Commission of the Chamber of Deputies. Under the measure, 15 percent of collected traffic fines will be used to fund bicycle projects in all municipalities with more than 20,000 inhabitants.

Are Capetonians longing for another icon after Cape Town Stadium?

MoDILA will be the centerpiece of an urban renewal initiative that will locate itself around a design precinct and high impact innovation cluster of technology, innovation art and leadership. Its purpose is to transform the cultural landscape, and act as an education platform of international significance to advance a Pan African project of cultural,entrepreneurial and technological renewal. The City of Cape Town will shortly begin working on a comprehensive study of Metrorail to determine the scope and quality of rail services within the metropolitan area. This will be done with a view to ultimately improving the integration of all modes of public transport and in anticipation of the possible devolution of the rail subsidy to the City. The City believes that a more integrated rail and public transport network is needed to better serve Cape Town residents and to build a more connected city. As the backbone of public transport in Cape Town, the Metrorail network requires an upgrade to ensure that it is safer, consumer-friendly and more reliable.

Iepe Rubingh, a Dutch artist, transformed a busy intersection in Berlin into a public art piece. “Painting Reality” is composed of bikers spilling liters of environmentally friendly and water-based paint in the path of moving traffic. Once spilled into the road, the various shades of color are spread into the street by the moving wheels of cars.

MIPIMWORLDBLOG | GRAND PARIS: THE KEY TO THE FUTURE OF EUROPE | GREG CLARK

If Europe is to succeed over the next economic cycle, it will need several more cities that are able to provide both world-class environments and the scale required for leading business clusters. Combining quality and size is critical to global competitiveness. But Europe currently has only a few places where this is possible. In the future, Istanbul and Moscow may become great European business hubs, and we will see Barcelona, Amsterdam, Manchester, Hamburg, Munich, Zurich and others grow to offer genuine scale as well as quality. But in the short term, Europe needs London and Paris to lead this charge

Download the fourth edition of Cities of Opportunity, 2011. This year the report covers 26 cities and presents in-depth results covering all 10 indicators and 66 variables, examines issues and adds insight from urban thinkers and influencers 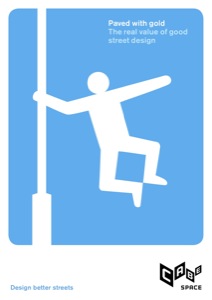 How economic benefits connect directly with the quality of street design, management and maintenance.

This report presents new research that shows how good street design contributes both economic benefits and public value. It shows that investment in design quality brings quantifiable financial returns and that people value improvements to their streets.