While Cape Town’s social and economic development policies are focused on solving the problems of its dense peripheral regions, a better strategy is to increase residential densities in the inner suburbs to give more low-income residents a chance to benefit from the employment opportunities and services they provide. 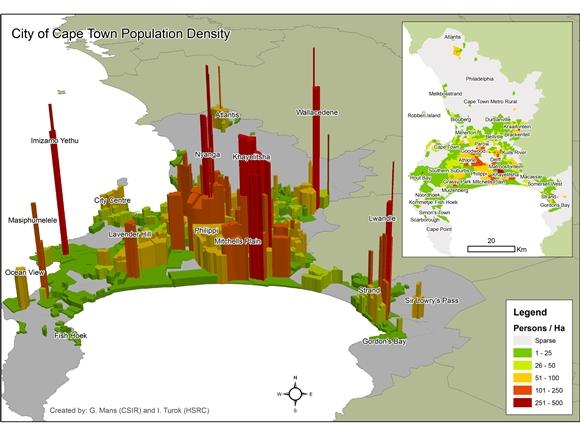 A map of Cape Town’s population density, as published in the State of South African Cities Report, 2011, showing low densities around the City Centre and high densities in peripheral settlements including Khayelitsha, Wallacedene and Imizamo Yethu. © Gerbrand Mans, Ivan Turok and the South African Cities Network; used with permission.

In the latest State of South African Cities report, Professor Ivan Turok of South Africa’s Human Sciences Research Council discusses the intense and problematic disparities facing Cape Town. The city continues to display signs of inverse densification, where the peripheries are densifying much faster than the inner suburbs, a lasting symptom of the country’s harshly divided spatial history.

While the poorer areas of the city (Khayelitsha, Imizamo Yethu and others) hold the vast majority of the population, higher-income areas such as the City Centre and the Southern Suburbs remain relatively underpopulated. This unequal layout not only perpetuates historical divides but also excludes the majority of the population from integrating themselves productively and regularly into the city’s economic and social functions.

Read more at The Global Urbanist