In the fourth article in our series of 17 Sustainable Ideas for COP17, Justin Woolford at Forum for the Future, visits Freiburg and shares the successes of a green community, designed by the community. This should surely be a case study for local governments and authorities, aiming to grow sustainable communities in the face of a modernizing and urbanizing world. Any commitment to a reduction in carbon emissions can and should start within the communities in which we live. 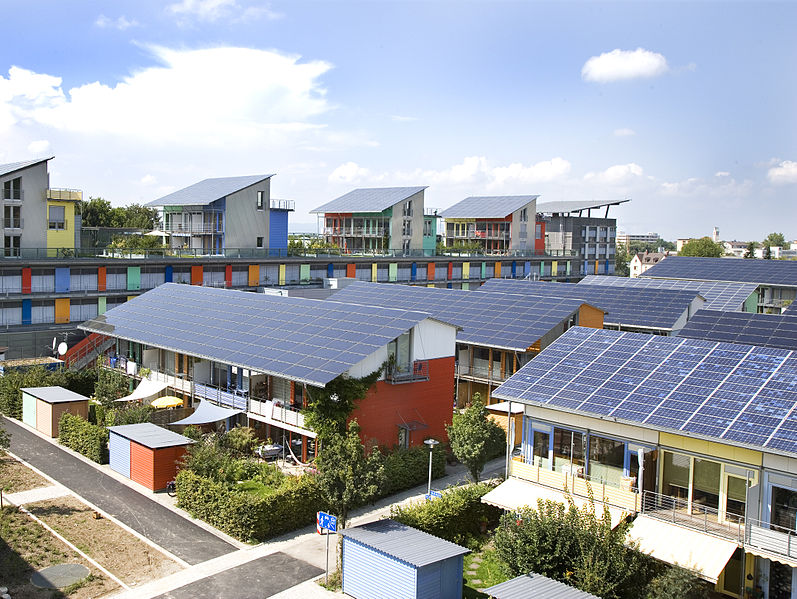 I’m standing at the foot of an ingenious heliotropic house in the solar district of Freiburg. Mounted on a central wooden spindle its solar roof follows the sun while the living space below orients itself to maintain comfortable conditions inside depending on the season and the outside temperature.

The house is just one example of the innovation to be found in Germany’s foremost renewable energy city. The cutting edge is in the Vauban quarter. But here, it’s not just about energy. Vauban as it is today was born in a post cold war renaissance on a former French military base. When the former allies upped and left in the early ‘90s, pressure on Freiburg’s housing meant that a band of intrepid young green activists occupied the site in trucks and vans. Nearly 20 years on the quarter is a thriving hub of sustainable living made up of modern ‘passive housing’ blocks that eliminate the need for externally powered heating and cooling. Most have solar panels and various other resource efficiency measures.

In the transition from green activist camp to one planet living nirvana, local residents won a commitment from the local authority that the majority of the land would be closed to commercial developers. As a result, each block is unique in its design, part of a vibrant plethora of private developments by individual co-operatives. It’s a community owned and shaped by and for the community. And what a difference it makes. In the autumn sunlight, the beauty of the fallen leaves and green spaces is stunning; but there’s more. Vauban’s crowning glory is its car-free streets. They are not forbidden but can only enter for deliveries and pick ups. Residents that do own cars are obliged to retire them to allocated car parking on the edge of the district, but the majority opt out of vehicle ownership altogether, using their share of the city’s parking levy in joint ownership of a virtual car park – a piece of communal land that, notionally at least, could be used to construct a multi-storey car park, thus satisfying local law, but in reality providing residents with a green space.

The absence of on street parking means that each resident’s mobility starts on foot or with a bicycle. No apartment is more than 500m from the city’s super efficient tram service or a range of local shops and services and the locals call the district the ‘city of short distances’. It’s a safe, colourful, friendly community. I want to move here.

In the early days, planners and investors said it couldn’t be done, so how did it happen? The anti-nuclear cultural hinterland – Freiburg is the birthplace of the German Green Party – undoubtedly provided a fertile context for the emergence of this high quality of living quarter. But what’s evident is something else: positive ambition and a can-do attitude. In Vauban, impossible really is nothing. The strength of co-operative enterprise and the social contract are paramount, the sense of pride everywhere evident. It’s a unique place that shows what modern urban community living can and should be.

This article originally appeared on the website of independent sustainability experts Forum for the Future.