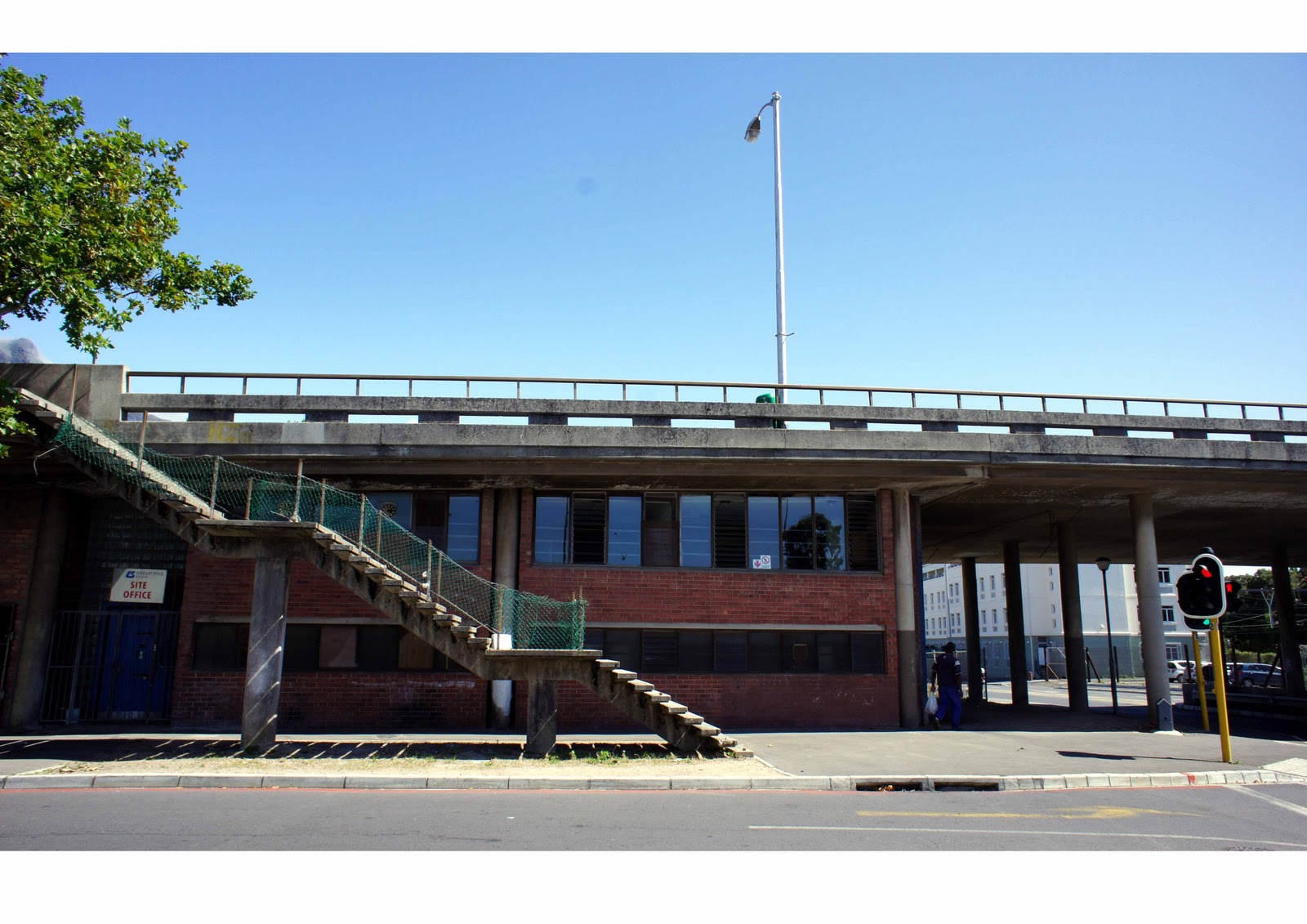 Dead space: we find it at peripheries or where one urban planning scheme is forced upon another. Or where scaled drawings don’t match up to reality and the bigger picture takes precedence. An excellent example of this in Cape Town, can be found wedged awkwardly between the railway tracks and Claremont; particularly from Springboks pub and the brewery to right up behind Stadium on Main.

Recently a certain amount of revitalisation has occurred in this area, with the building of  a new road and bus stop. But this does little to change the nature of what is really “left over space.”

However these spaces are never really dead. What appears a wasteland is often a sanctuary. Think back to that dingy cupboard under the sink, you know the one. It often was the location for your personal dream versions of Alien. If that’s not working, recall David Attenborough’s voice transfixing your eyes to images of scampering lizards and trapdoor desert spiders in some desolate dry sandy place.

In a not dissimilar fashion to those that slip through the cracks of our built fabric. This particular site plays host to all manner of minority (save for parking which seems to be the default filler of any free space our city might have). If you’re not a member of the Claremont Dramatic Society, or PIP-ACK(see their directions unique map here) or perhaps a frequenter of the Haven Night shelter across the way you’re unlikely to have notice the activity that goes on below the flyover.

As with any space of this nature various oddities make themselves well noted. One is the jagged brickwork which abuts the road. It acts as a curious double-sided, paint-faded optical mural for motorists driving by. Another is the fencing which surrounds the site. It is the same temporary fencing one finds cordoning off building sites, yet its rusty appearance speaks of its permanence. Other features worth noting are the decorative  facade treatments of one of the entrances which I suspect once may have been public restrooms. 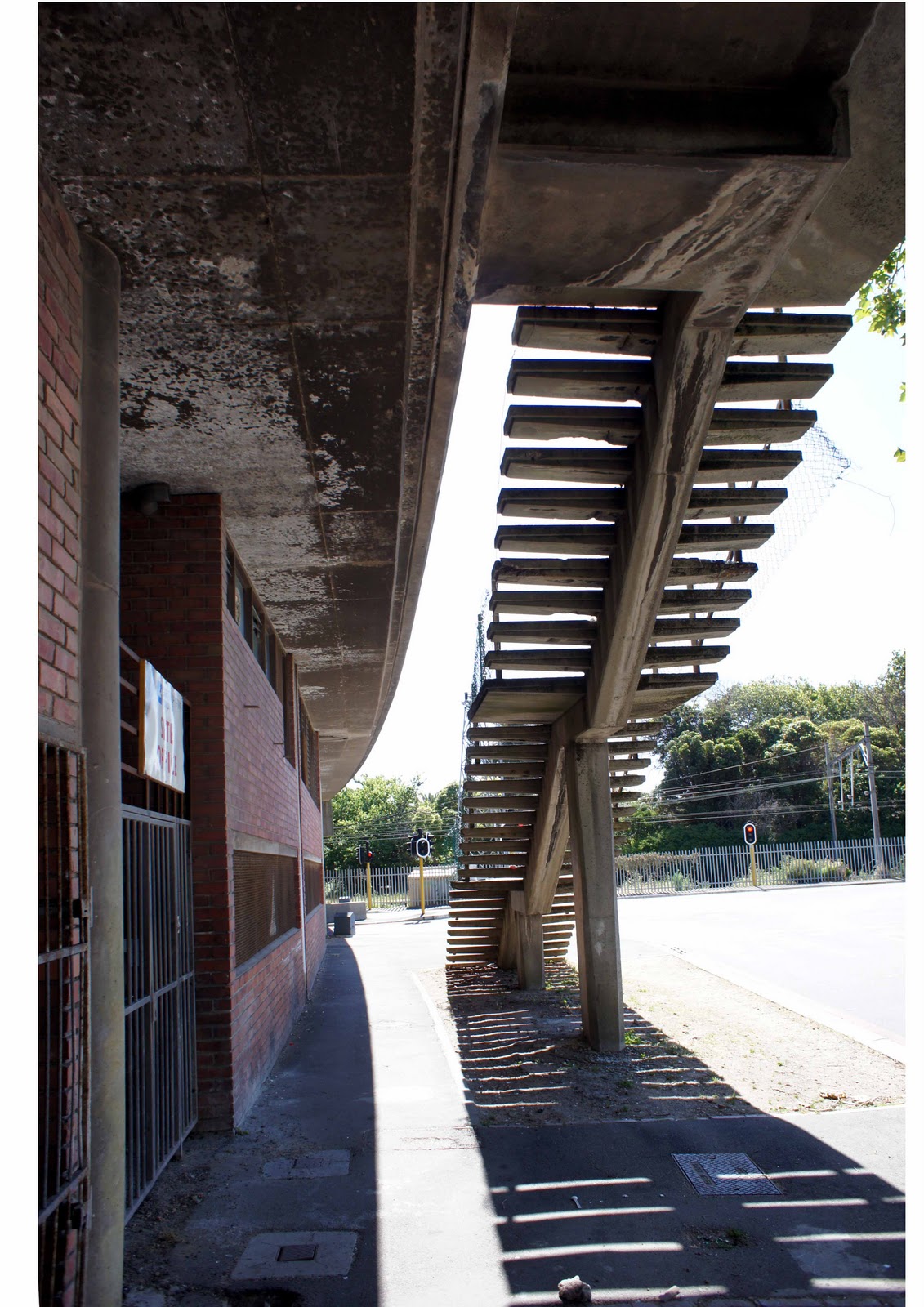 My favourite has to be the precast concrete stair. It affords pedestrians a space to join the traffic above but upon reaching the landing one finds it leads leads nowhere. I’ve often however seen men enojoying their quarts of Friday zamalek up here. Comfortably above below, shaded and in-between. A real position of vantage and comfort from where those walking towards the train station can be observed and catcalled. 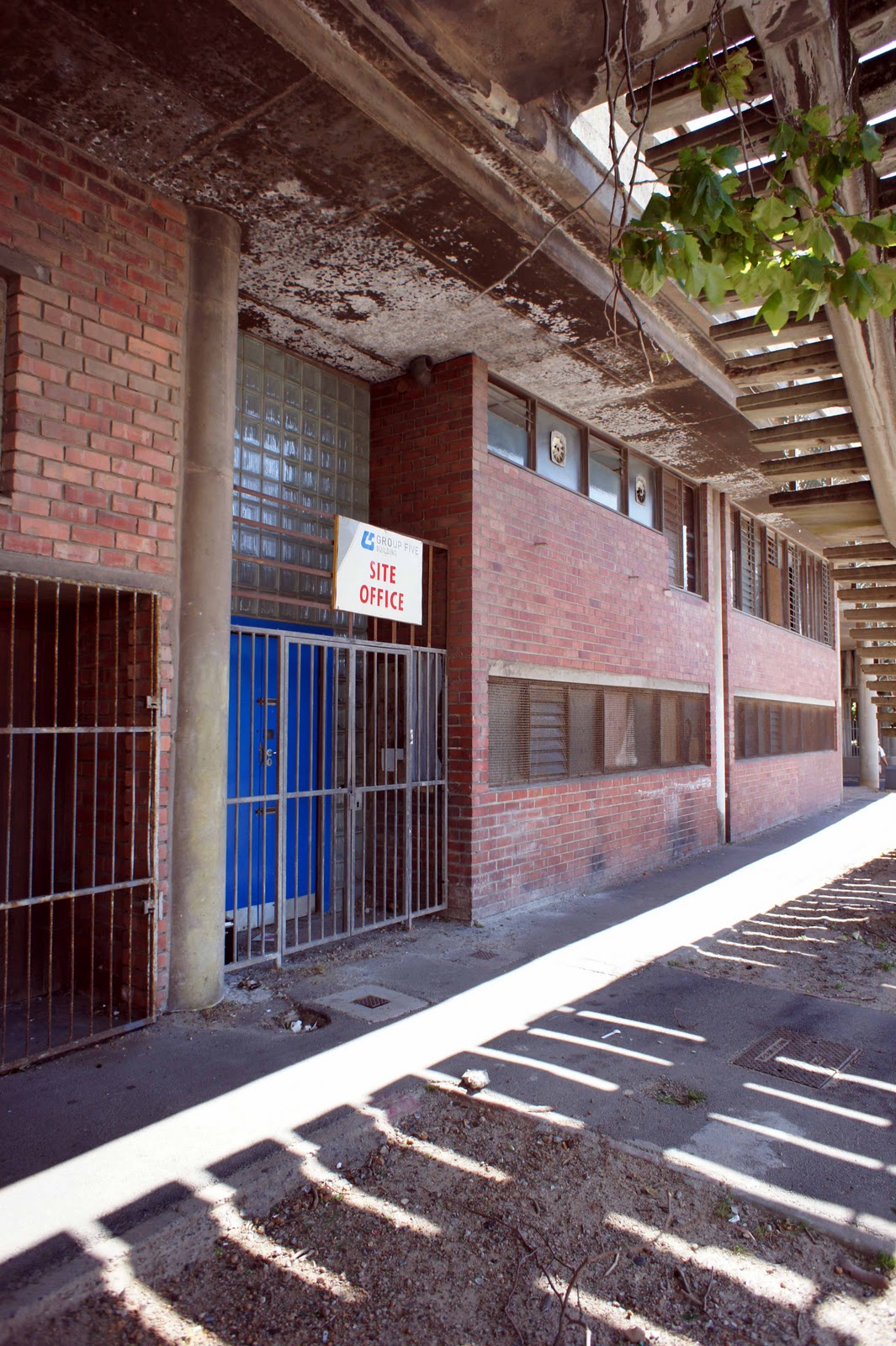 So while this space may be forgotten – pushed to the borders of urban layout and our minds – it’s not uninhabited but adapted to by various minorities. It’s this sort of adaptation which the city should encourage and support so that a little pride can be felt by those using these spaces. It surely will reflect in its appearance and before you know it, these sorts of spaces will be better frequented, safer and assets to the various communities that use them. 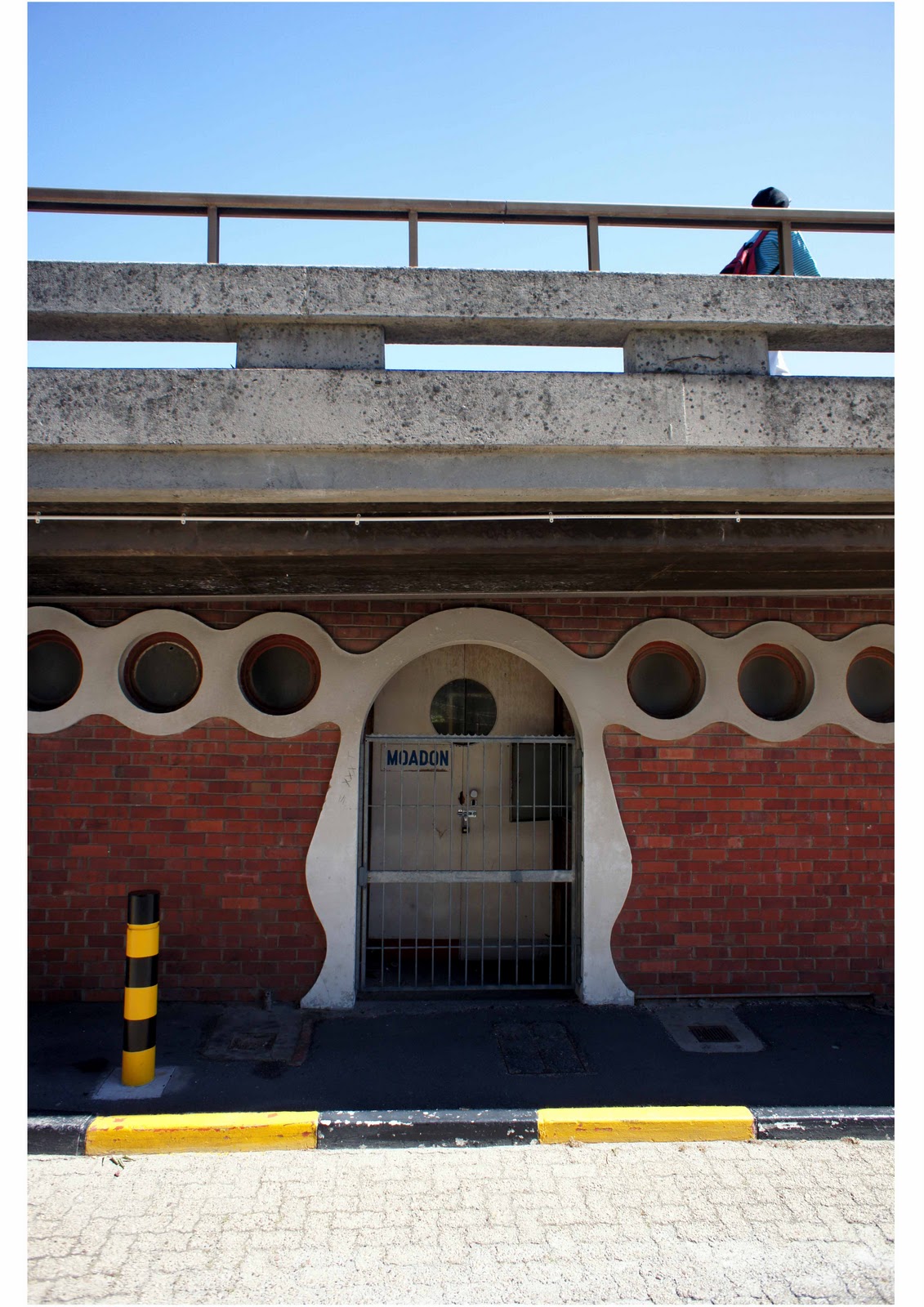 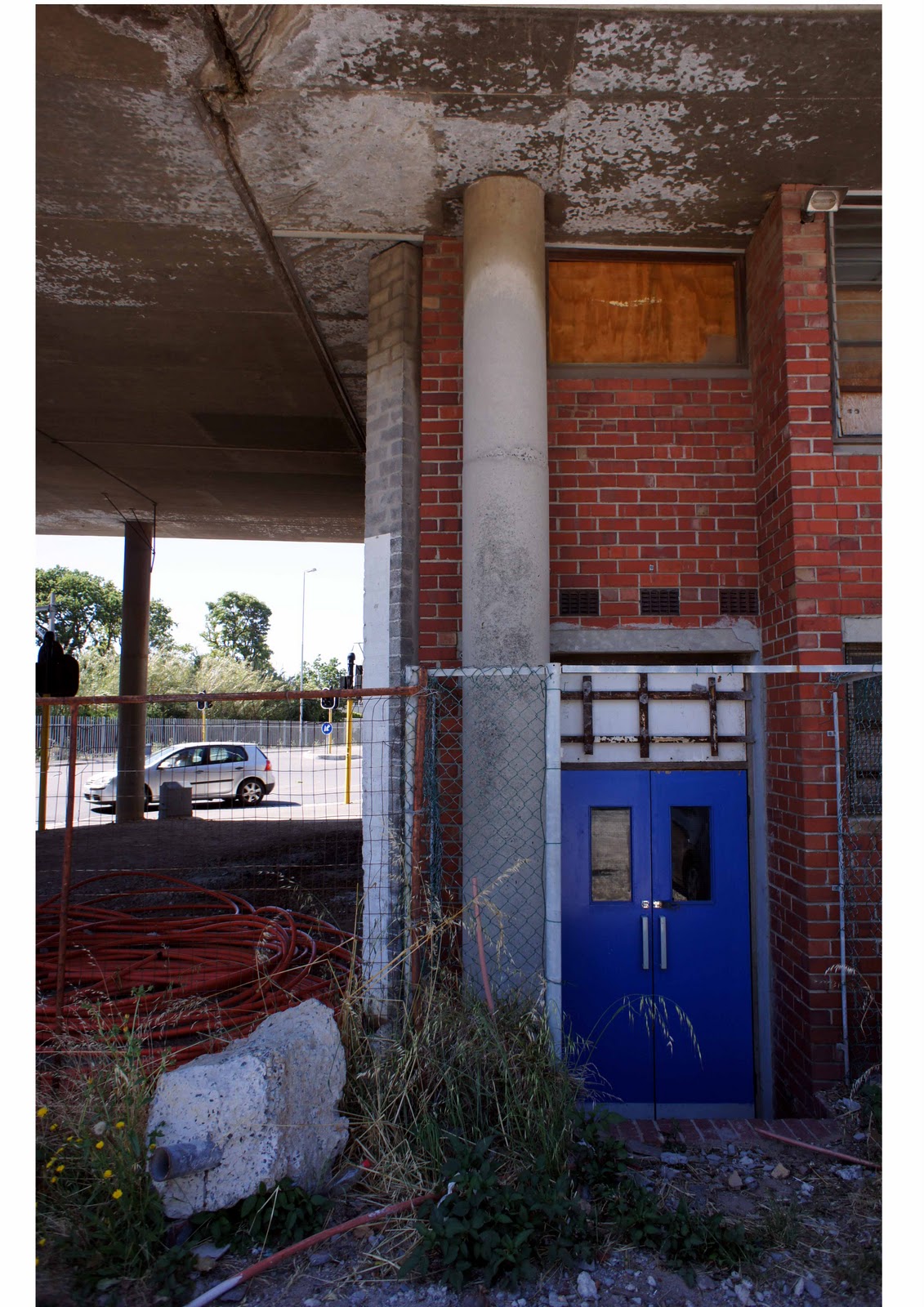