The construction, and subsequent operation of a modern stadium can – depending on the source of financing – come at a great cost to the public purse. When a venue of this scale is constructed, it is traditionally mooted as a “multi-purpose” venue, and based on the field dimensions, can host football, rugby, potentially athletics, concerts, and other events which are considered typical stadium bowl events. But more recent case studies from cities across the world have tested and advanced the concept of “multi-purpose”, by hosting “non-traditional” events like tennis, hockey, handball, basketball, and swimming within the arena. In Cape Town, proposals by a current private consortium aims to use Cape Town stadium as a centrepiece in the bid to stage an F1 Grand Prix race in the city, with track winding through the venue, allowing spectators a good view of the action.

Thinking out of the box, not only markets the venue as truly “multi-purpose”, but can contribute towards its financial, and social sustainability as part of an expanded offering to residents, tourists and events organizers.

Here are a few of our favourite examples from around the world:

SEVILLE: The Olympic Stadium in Seville hosting the Davis Cup final between Spain and Argentina. A temporary, enclosed arena is built within the stadium. Credit: Paul Zimmer

ATLANTA: The Georgia Dome is used by the NFL’s Atlanta Falcons, and was used during the 1996 Olympic Games to host Basketball and Gymnastics, separated by a large curtain.

HAMBURG: As part of its 2013 bid for the FINA World Championships, Hamburg proposed constructed two temporary swimming arenas inside the HSH Nordbank Arena.

LONDON: Wembley Stadium hosting the Race of Champions in 2007. Credit: E01 at Flickr.

GELSENKIRCHEN: Hosting the finals of a Handball event. It has previously also hosted one of the world’s highest ever attended Ice Hockey matches. 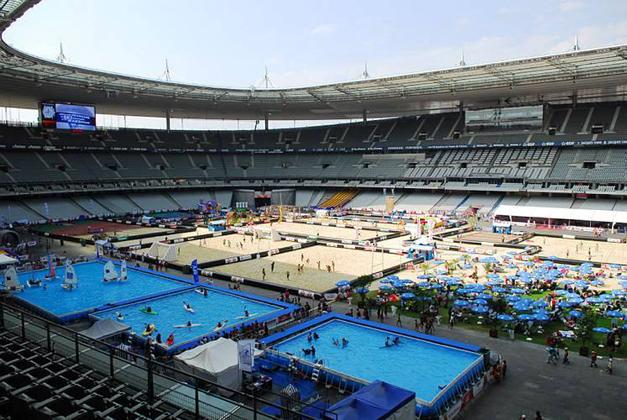 PARIS: For cities without the ocean or a major water body, astadium can become a venue for beach-based sports. Stade de France hosts the Coca-Cola Sports sessions which brings a variety of beach based sports inside the stadium.