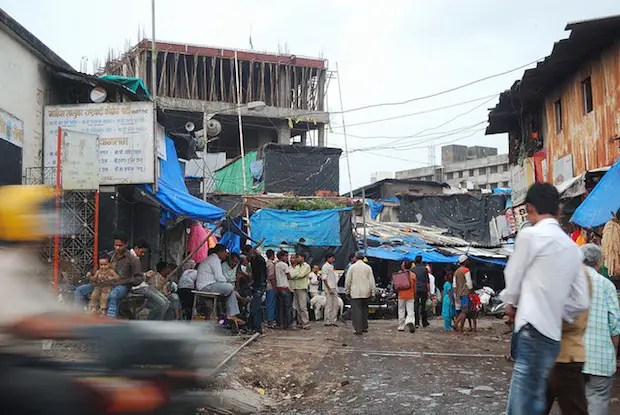 By Rachel Smith at This Big City

This post is also available in: Chinese (Traditional), Italian, Hungarian

Last week, before I left for Mumbai to speak at the next stop of the BMW Guggenheim Lab’s 6-year tour of 9 cities, I visited a new ‘master-planned community’ on Brisbane’s north side. The houses haven’t been built yet, but the wide residential roads, narrow concrete footpaths on broad grass verges and seven-foot high fences are already in place. I asked the sales manager where I would see people in my ‘community’ if I were to – which I wouldn’t – move there. He told me that I could be at the Westfield shopping centre in less than 14 minutes, by car.

“What are you thinking?” asked Jeremy as we stood outside a supermarket sipping orange juice on Wednesday morning.

“That this is probably active streets utopia. The type of street that Australian architects, urban designers and city planners dream of,” I replied.

We were in the main street of Dharavi, one of India’s largest slums, on the renowned Reality Tours ‘Slum Tour’.

Slum tourism is controversial, contentious and criticized, but what we observed, as residents of Sydney and Brisbane where people retreat to the privacy of their backyards, shop in out-of-town air conditioned inward facing shopping malls and where the streets are deserted after 9pm, was that here the streets are alive. Moreover, the design principles in the Heart Foundations active, or people orientated, streets publications [pdf] are very much realized.

In this real, not manufactured, street and community people interact; they talk, they laugh, they shake hands, they share, they drink Chai with friends, they buy, they sell, they trade. Children walk to school hand in hand, bicycles carrying cargo weave around the groups of chatting people, motorbikes slowly swerve around vegetable stalls and of course, the background noise is car drivers honking their horns.

Dharavi, a mixed-use self-contained residential and commercial ‘development’ with a guesstimated population in excess of 1 million, has a real, and very genuine, sense of community. It has a sense of purpose, its full of people with spirit and determination but most of all it has that ‘sense of place’ that adorns Australian property development and real estate marketing materials.

The big difference between Dharavi and most cities, including Brisbane where I live, is that it has naturally evolved and developed over the last 150 years. Dharavi was created by the people for the people, and not planned and engineered on a drawing board or in a Computer Aided Design file. Perhaps ‘everyday’ citizens will design urban streets in the future? Perhaps these are conversations for the BMW Guggenheim Lab in one of the next 6 cities?

Rachel Smith is a Principal Transport Planner with AECOM in Brisbane. She is the founder of Cycling Super Highways, creator of We Heart Cycling, co-founder of Lazy Sunday Cycle and part of the BMW Guggenheim Lab.