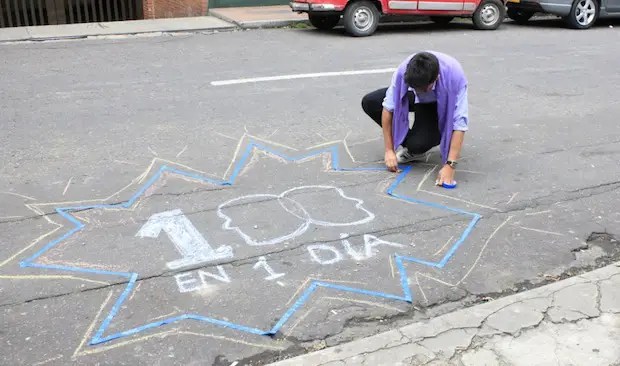 By Joe Peach on 18 April 2013 in Community, Latin America, People, Placemaking with 0 Comments.

This post is also available in: Chinese (Traditional), Spanish

There’s a limit to the amount of physical change one person or a small group of people can initiate in a city, but what if hundreds of citizens united, each putting in place the projects and changes they want to see in their city all on the same day? That’s the goal of 100en1día (100 in 1 day) – a social movement originating from Bogotá, Colombia, which aims to inspire citizen driven change on a significant scale, transforming cities over a 24 hour period.

The project has already encouraged hundreds of interventions in the Colombian cities of Bogotá, Pasto, Pamplona and Chinú, with street art, urban gardens and bike lanes all appearing on the same day. Bogotá is currently preparing for their second event on the 27th of April and international cities are also beginning to get on board. San José is launching its first event on the 20th of April and Cape Town and Copenhagen are running their own versions on the 25th of May.

Other cities have already expressed an interest in replicating the project. As a result, the team behind 100en1día are working on developing an online platform to make it as easy as possible launch local versions, saying: “We want to make it clear that 100en1día is a project for citizens to take action and realise their dream city.”

If you want to follow the interventions, click to find more information about Bogotá, San José, Cape Town and Copenhagen‘s events. You can also contact the team at 100en1día to find out more about launching the project in your city by emailing 100en1dia@gmail.com.

Something extra for those who speak Spanish: Check out the video below of Cristiam Sabogal at TEDxPasto speaking about 100en1dia.