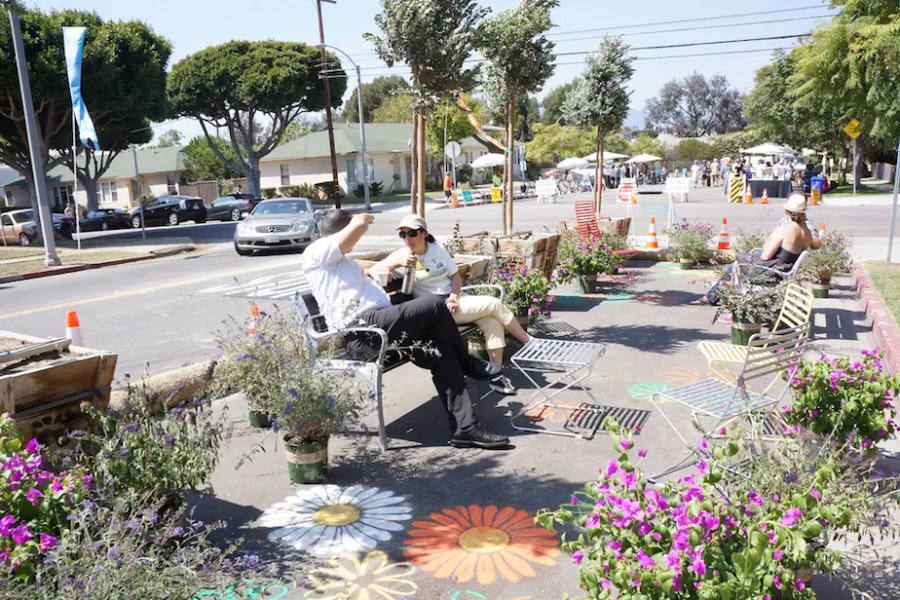 Calling all urban planners and designers of the public realm! It’s time to turn the traditional planning process on its head! Are you looking to push the envelope beyond the traditional community workshop with its rows of chairs facing the front, unimaginative PowerPoint presentations at the lectern, and weary audiences dissatisfied with the process? Want to liven up the planning process? Well pop a ‘Pop-Up’ into it and see what happens.

The City of Santa Monica and Melendrez – Los Angeles-based urban designers – along with help from Community Arts Resources, brought the idea of pilot and pop-up, tactical urbanism into the planning process, with a festival/workshop/installation called Pop-Up MANGo, the first event of its kind in the region. Pop-Up MANGo gave citizens an opportunity to see and evaluate public realm improvements during the planning process, hands-on. Pop-Up MANGo – named after the Michigan Avenue Neighborhood Greenway- showcased temporary installations of possible improvements for a new Greenway corridor such as: traffic calming devices, traffic circles, chicanes, curb extensions, enhanced landscaping, mini-parks, and places for neighbors to gather. 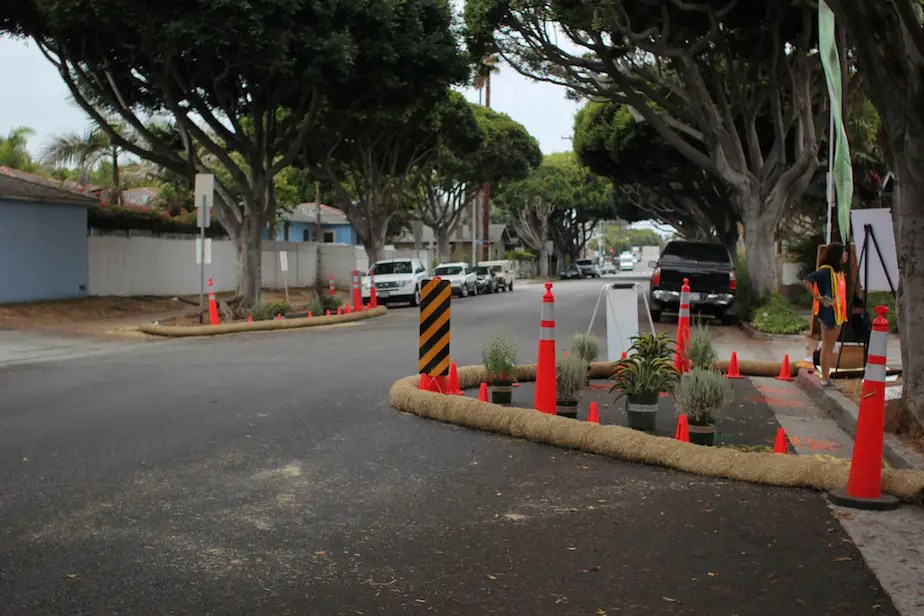 The 21st Century has been marked by a trend of temporary and DIY urbanism, “popping-up” in cities around the US, from New York’s temporary removal of cars in Times Square, to parklets and plazas carved from residual space in the streets of San Francisco and Los Angeles. Urban dwellers are increasingly carving out, demanding, and being drawn to these neat and quirky creative spaces, in a bottom-up approach to urban transformation. And with NACTO’s recent release of their great Urban Street Design Guide, which includes guidelines for handfuls of these sorts of improvements, it looks like these trends will increasingly be codified, embraced, and standardized over the coming years.

PopUP MANGo translated this idea of immediate, fun, temporary, and quirky pop-ups into the planning process itself, with demonstrations of potential improvements. The PopUp MANGo event was light hearted and community-oriented with local musicians, food trucks, booths with local organizations, arts activities for children, and a ‘passport’ program that guided people through the installations and gauged feedback. There were over 400 people in attendance and the feedback gathered is now helping the planning team craft a locally-rooted and locally-vetted design for the potential new Greenway through the City. 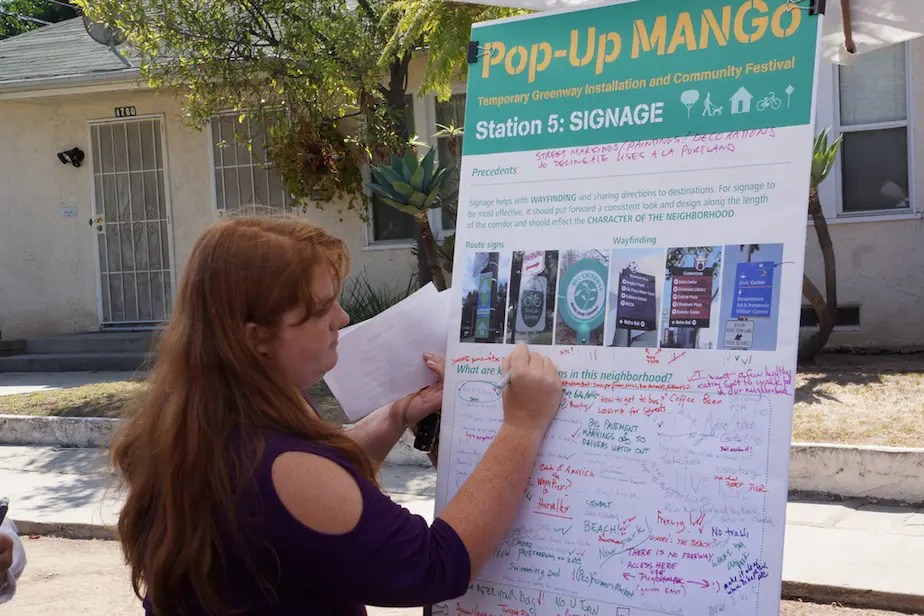 There likely will be more and more of these pop-up planning sessions, ‘popping up’ around the nation… Want to do something like this in your own community? Pop-Up MANGo’s toolbox consisted of mostly donated items:

Think local: Pinpoint things that are unique to the neighborhood to make the event distinctive and place-specific. Santa Monica is a creative city that values art and community collaboration; the design team used big artistic stencils and the help of community volunteers to give the event a creative and community vibe. The team also reached out beforehand to many local organizations to vet designs and event strategies. Santa Monica Police Department, Santa Monica Spoke, Santa Monica Walks, and Meals on Wheels West were all present. A kids’ art workshop making bike reflectors was held as part of the event, in collaboration with the Santa Monica Museum of Art. The event itself took place in the street right on the alignment so that people who lived along it could easily participate. 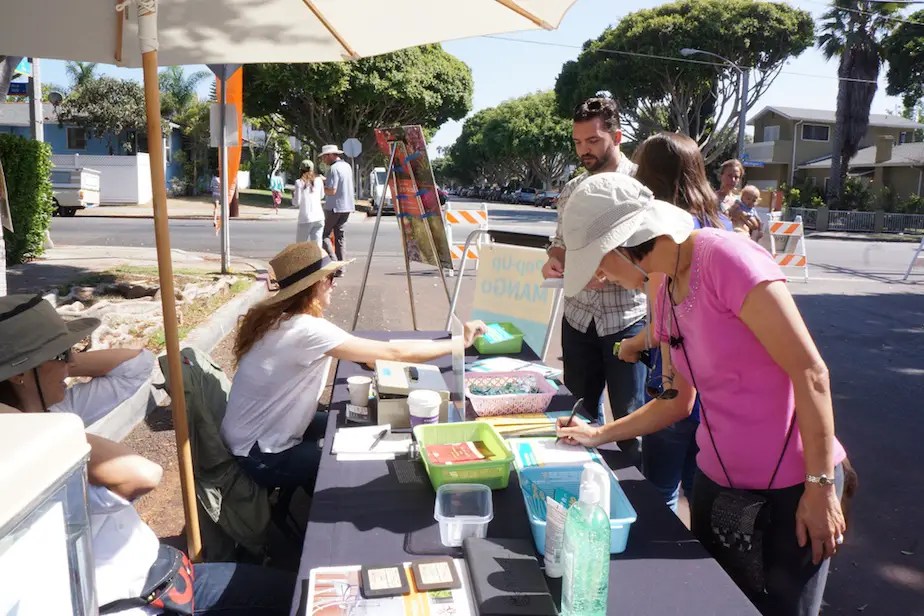 Think fun: The days of humdrum planning processes should be a thing of the past. Think about what can transform your standard public workshop into a real event for the community; an Experience with a capital ‘E.’ Local performers, special cuisine, etc. Know someone who can install a temporary piece of art that’s interactive? Have a friend in the community who is a one-man band? Get them there! Having free food as an incentive worked at Pop-Up MANGo, where grant funding allowed budget for lunch vouchers for participants who visited all six stations.

Think stats: The beauty of ‘PopUp Planning’ is that you can get a ton of people to participate in the planning process and it can be a lot more rewarding than traditional processes since participants can see and feel improvements first hand. Be prepared to gather information in a thoughtful way so that you can use it to build momentum and make decisions in the planning process. At Pop-Up MANGo participants filled out questionnaire comment cards which allowed the team to rank community priorities quantitatively. Don’t forget to follow up afterwards with participants and community members to showcase how the planning process directly impacted design and planning decisions.

Amber Hawkes is an urban designer at Melendrez in Los Angeles and part of the faculty at the UCLA Luskin School of Public Affairs Urban Planning Department.