f w
h
fFacebook wTwitter gGoogle+ pPinterest
With the weekend firmly in view, Brett Petzer and Rashiq Fataar kickstart conversations – and invite you to finish them in Comments. These dialogues are freeform to encourage debate and let in a little fresh air on some classic debates about the present and future of our cities. So, please take sides and join in. 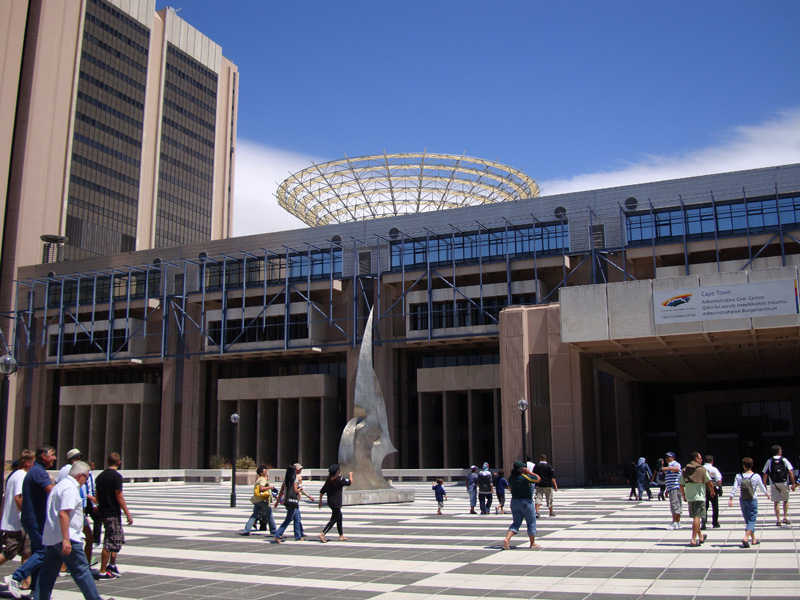 Rashiq Fataar: I had a thought this week: where should local government physically be located in a city?
The current approach is of course to cluster staff and departments in a central location or complex, e.g. the Civic Centre building on the Foreshore or the Provincial Government building on Wale Street.

But what iftheywerelocated in different areas, with the aim of improving service delivery and performance? What if,for example, the Arts and Culture Department were to use an abandoned building and create a creative hub in which the department worked from? Or a transport department located above the main transport interchange? Or perhaps a Human SettlementsorStormwater Department located where the immediate challenge is the biggest?

Brett Petzer: I can see the appeal of moving higher-order infrastructure out of the centre of town towards points of greater need, especially symbolically. I think that it would signal an precedented shift of priorities in local government if the provincial education department shifted to Khayelitsha, or if the department of health moved to Gugulethu. For a start, this would force decision-makers into direct daily contact with their most immediate priorities – and as a matter of routine, rather than something that occurs only within organised field research or on fact-finding trips.

However, the danger of empty symbolism is also great. Another problem is that decentralising government buildings would make it harder for the average citizen to travel between several of them, as one must when registering a business or applying for an educare centre licence, for example. Right now, although they’re far from the majority of Capetonians, they are all at least in the same place – and that place is where all the rail, taxi and bus lines converge.
RF: Good point, and maybe the need for empty symbolism needs a deepening and improvement in the relationship between politicians and communities and the sectors e.g. transport, health, housing etc. that they serve.

There is of course the issue of disruption, and practically re-locating so many offices and departments to different site, and the procurement, administrative and other challenges which come with it, of which cost will be a big factor. Local governments also have councillors and sub-councillors in different wards and communities across the metropolitan region, meant to keep and eye and ear on the ground, and work within that context.

In addition district offices, libraries, and other infrastructure exists across the city so perhaps the question is: how effectively is the existing infrastructure of local government being used to improve service delivery? Can a library be more than a library? A drive license testing centre have additional functions? There is a larger question of whether collaboration across departments (and tiers of government) would improve or not. Even within the same buildings or precincts this seems to be a challenge in which major inroads can be made.

BP: It seems to me that nothing will make government departments coordinate better amongst themselves, or between spheres of government, other than a fairly explicit effort to force them to do so. Otherwise, the incentives are simply too strong to avoid risk and do what’s been done before, dressed up in more fashionable phrasing.

An exciting innovation in this direction is the new problem-based procurement approach in Philadelphia and Barcelona (on which Citiscope has written a good summary). These cities are advertising tenders that say, ‘Fix our problem, any way you can’ – be it changes in legislation, infrastructural spending or simply a savvy awareness campaign.

When you frame a question about, say, commuter cycling in this way, the answer is free to encompass all spheres of government and all entities with a role to play – or as we like to call them, the “stakeholders”.  It would be an immense imaginative leap to see the City of Cape Town advertise for a scaleable, sustainable sanitation solution that had a cash prize attached, and then implement a shortlist of the five best schemes as a pilot project. As with public architecture, an open competition culture – and the openness of outlook that it implies – is badly needed in public spending.

RF: And we know much work is needed in honest communication. Framing the challenge and brief might bring people out of their departments and focussed on a potential solution.

Join the conversation below by adding your thoughts and ideas in the comments section.
Tagged: government headquarters service delivery