“Where are the monuments to freedom fighters, students and others that lost their lives protesting?” 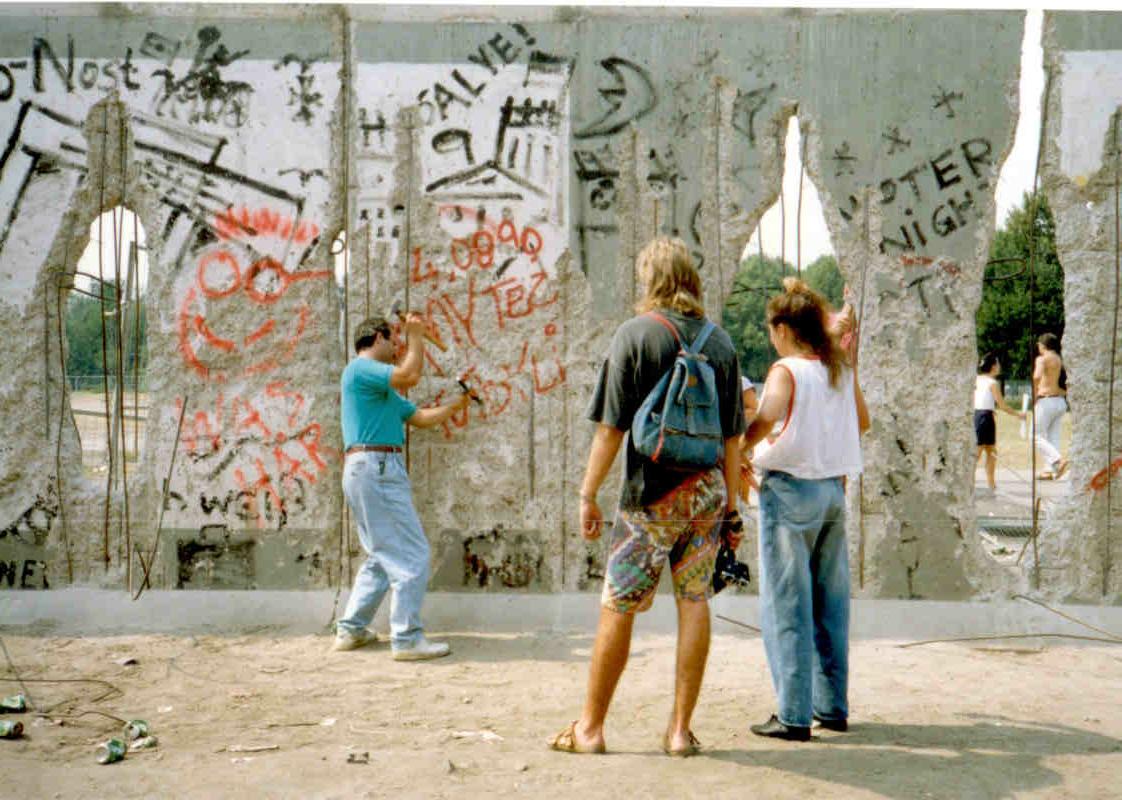 In this edition of A weekend conversation, Mayra Hartmann, an engineer based in Berlin, joins Rashiq Fataar and Brett Petzer to chat about how two cities, both devastated by the architecture of division and separation can learn from one another.

Every odd weekend, Brett Petzer and Rashiq Fataar kickstart conversations about Cape Town – and invite you to finish them in Comments. These dialogues are freeform to encourage debate and let in a little fresh air on some classic debates about the present and future of our cities. So, please take sides and join in.

Travelling through Berlin, and seeing the transformation of the city (on a bicycle), I can’t help but to think of Cape Town. Both cities, while vastly different, come from long histories of physical and social division,  and the remnants and legacy of the “architecture of division” still exists but in different ways.

In Venice, Rem Koolhaas, presented and curated the main exhibition entitled “elements of architecture”, which focuses on architectural components such as elevators and escalators, which “have never really been incorporated into either the ideology or the theory of architecture,” according to Koolhaas.

In this light what is are the elements of the “architecture of division”? City gates, Berlin Walls, and other structures of Berlin’s past in parallel or in similar fashion appear in Cape Town but perhaps they are invisible? Where is the City Gate in Cape Town? How would you draw our Berlin Wall or walls? How does the West and East (although South East) become more reconciled and connected?

What if we start to build a more inclusive city by perhaps identifying typologies of division in our urban and spatial realm and specifically intervene to bridge divides, in the literal and figurative sense.

How can Cape Town learn from Berlin?

I think one great hurdle for Cape Town, and South Africa as a whole, to overcome its invisible walls is the relationship, or lack thereof, with its past. I find that the process of confronting the historical scars of our cities and country has been utterly lacklustre. People shy away from the tough questions and no one actually took responsibility for the atrocities that were committed in the name of preserving apartheid.

The National Party and affiliated organisations such as the Broederbond were forgiven in the name of Ubuntu and welcomed into the embrace of the ‘rainbow nation’. However, reconciliation does not mean justice, much less does it mean equality. The scars that this injustice leaves behind are real and cause resentment between communities. This frustration and incomprehension may be interpreted as racist by some and therefore only succeeds in creating more walls between communities. 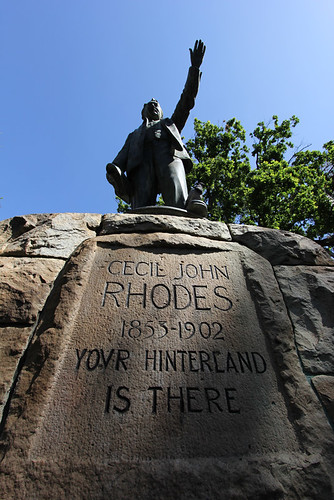 Then there is the issue of Reparations. I believe there has been no meaningful attempt in South Africa to compensate non-whites for the damages caused by inhumane government policy (which I once again see as shirking responsibility) – further deepening already entrenched divides. You cannot come together if one group refuses to take any step closer to the other and ‘demands’ forgiveness. The National Party stalwarts should have instead been incarcerated for crimes against humanity.

Walls (invisible and physical) are further put up when the entrenched poverty created by apartheid has not been addressed and commercial and economic power still lies in the same hands it did 30 years ago. A dialogue exists  but for me the main thing that Cape Town can learn is to face its history head-on and unafraid – asking the difficult questions; and to stop pretending that the ‘rainbow nation’ is real and as a bare minimum acknowledge that the walls still exist.

There are still monuments of colonial figures and National Party politicians. Stellenbosch University has plaques and buildings that commemorate apartheid ideologists, Dr. Hendrik Verwoerd and DF Malan. In Cape Town, Cecil Rhodes has an imposing presence in Company’s Garden and on the UCT campus. This is unlike Germany where physical monuments of Adolf Hitler and Third Reich insignia have been banned.

Where are the monuments to freedom fighters, students and others that lost their lives protesting?

We are certainly NOT all equal or the same – we have distinct skin colours, cultures and beliefs. We must acknowledge our differences and appreciate our diversity. Only when we reach this stage of common understanding will we be able break down the invisible barriers.

Mayra, that’s a good and strong angle from which to look at Cape Town: no monuments of any great scale attest to our democratic transformation. The Apartheid statues are still standing. It took 17 years for the first democratic government to change the name of a street, Oswald Pirow, that glorified an emphatic Nazi who founded a brownshirt political movement in 1940 that was part of the National Party for a time.

And I think you ask some very basic questions, and I would like to add some more: why is it that the grand monuments of colonial, imperial and apartheid history remain in place, and why are there no monuments of equivalent stature to tell the ensuing historical story? Why are our post-apartheid monuments in Cape Town limited to very small-scale public art, and to renamings? Why – the limited educational component at Robben Island notwithstanding – is there no place in South Africa’s second city to learn about Apartheid as a whole? We have a powerful institution in the District Six Museum, but that is only one vital strand in a much broader tapestry. Why, then, does Cape Town insist on only telling local history, to go by what it has spatially? Most especially, why is the Grand Parade – where, one could argue, closing credits began to roll for the colonisation of Africa on 11 February 1990 – just a parking lot with a plaque?

I think that what Berlin can teach Cape Town in this regard is that it is a mistake, even in our vastly different context and even at our greatly different level of wealth, to pretend that political change need only occur on the most sophisticated plane – that of constitutional dispensations, of negotiated revolution, of state-making. Political change must be articulated, if people are to feel close to it, on a basic level at the same pace and at the same time as it happens around the negotiation table. I think Berlin has done a good job of ensuring that there is a process among the people that runs in tandem with that underway in government. And this is where monuments come in.

I understand the hostility to spending on non-essential infrastructure in our developmental state, but I must say that I have seldom heard this argument come from the poor themselves. If you are poor in Cape Town, you know that your education is unlikely to be better than so-so, at best. You are fairly likely to be waiting for a house, and you know it isn’t coming soon. But, when you travel to the city and see a still mostly white elite enjoying the best of this peninsula, it would be something to be able to visit a real place in Cape Town where the facts of history were laid out simply and compellingly, where you could explain to a child what the Struggle was and what it meant. We can scoff at the building of monuments, but I am always heartened when I see that city leaders have the foresight to realise that there is an infrastructure of the mind as well. We could have saved money on the construction of schools and transport interchanges in the informal settlements, and put what was saved on the building into the teachers or the buses and trains that use it. But that is only infrastructure of the everyday. When I say infrastructure of the mind, I mean that Berlin built physical monuments to the Holocaust and the fall of the Iron Curtain that put public money into the bringing-up-to-date of the built historical record.

In Cape Town, we do one thing right, which is – albeit very slowly, and not evenly, and not in every case wisely, but overall inspiringly – that we build some public infrastructure at a monumental scale and to a monumental quality. This is expensive but it allows the resulting places – like Inkwenkwezi Secondary, or the Kuyasa Interchange, or Khayelitsha Hospital – to operate on two scales: the real and the symbolic. It brings a symbolic victory, as we in this country and in this city collectively achieved over Apartheid, down to the level of bricks and mortar. And yet, it is too subtle: we need an Apartheid Museum in Cape Town, and we needed it a decade ago. You can visit and Instagram every monument in this city and safely not ‘get it’, and I know many whites who have done just that.

Good points Mayra and Brett, but I wonder where does one begin and end with the removal or demolition of apartheid architecture? The South African era of modernism still dominate part of the landscape of our cities, so should these e.g. government buildings, be replaced with new structures and buildings? As you say it took us long enough to rename our streets, even those named after dictators.

I like the concept of infrastructure or architecture of the mind that recognises the roles of architecture as a tool of memory, old and new, and one that can influence the psychology of generations to come. The references to the Grand Parade and its current role and state is valid, especially a site of where architecture, be it landscape mostly, united people not only on the release of Mandela but also during the 2010 FIFA World Cup. How can design and architecture then go further?

And the creation of an Apartheid Museum in Cape Town, raises interesting thoughts, where elements of architectural division perhaps needs constant reminders in the content of the museum, on a grand scale which acts as a call to action to the way in which architects and designers need to work within the fabric of division.