“everyone in Africa will feel part of the tower” The tallest, newest, largest and fastest developments in Africa in 2015. Here are some to keep an eye on.

The rapid growth of cities and urban areas across the vast continent of Africa – both in terms of population, and in terms of the built and physical environment,  raises many interesting questions. One of which relates to how Africa’s future (through the stories of the many cities and countries) will be depicted and represented by key developments, stories and iconic projects. While some of these may be questionable, here are some of the developments worth watching in 2015 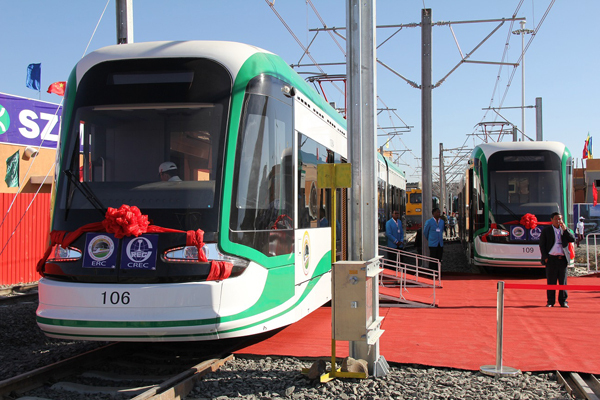 Testing has started on the $475 million USD light rail project in Addis Ababa, expected to be running by May 2015. Stretching for a combined 32 km, two lines dividing Addis Ababa north-south and east-west will serve 39 stations, in underground and overground sections. The system is however being  built by China Railway Engineering Corporation (CREC) and mostly financed through a loan from China’s Exim Bank,

According to the Rail Journal, the system is being built by the China Railway Engineering Corporation (CREC) and is 60% financed by China’s Exim Bank is financing 60% of the light rail project, with the remainder coming from the Ethiopian government. The network will be maintained by China Railway Engineering Corporation (CREC) and Shenzhen Metro Group under a $US 116m five-year contract awarded by Ethiopian Railway Corporation (ERC) last year.

Al Noor Tower being developed by Middle East Development is a 114-floor skyscraper and will reach 540 metres into the sky in the Morrocan city of Casablanca. It is set to be the tallest in Africa and will cost over $ 1 billion USD. The final height is meant to act as a tribute to the 54 countries that make up the African continent – and the mixed-use building would house a seven-star luxury hotel, art gallery, spa, fine-dining restaurants and luxury boutiques, alongside an exhibition centre and offices.

The architects behind the tower, Valode & Pistre, say its sweeping design has been inspired by the feel of a wedding dress and that its elongated form resembles the nib of a fountain pen when viewed from the side. The building’s façade will be imprinted with references to the 1,000 languages and dialects spoken in Africa to ensure that “everyone in Africa will feel part of the tower”. Kenya has officially given the go-ahead for the largest wind farm to be built in the country’s Lake Turkana region in the Rift Valley. The wind turbines will be supplied by Vestas Wind Systems, who confirmed that it has received an order for 365 V52-850 kW turbines. The 300 MW Lake Turkana Wind Power Project, which is being developed in the country’s North-East, hopes to produce 20% of the country’s current installed electricity generating capacity when it comes online in 2016.

The almost-400 turbines is expected to produce around 300 MW of electricity, and according to a media statement will save Kenya approximately $178 million in fuel imports every year. It is also expected to only be completed in 2017.

The African Development Bank (AfDB) report, titled Tracking Africa’s Progress in Figures predicts that Dar es Salaam in Tanzania will be Africa’s fastest growing city between 2010 and 2025, growing from 3.3 million to 6.2 million people – an 85% increase. Nairobi, Kenya and Kinshasa, DRC are expected to be the second and third fastest growing cities by 2025 at 77.3% and 71.8% respectively.

The shift toward cities has been a pan-African phenomenon. From 1960 to 2011, the urban share of Africa’s population rose from 19 percent to 39 percent— equivalent to just above 416 million people in 2011. By 2040 half of Africa’s population will live in a city. Several African cities, such as Dar es Salaam and Kinshasa, are now and will continue to be among the fastest-growing in the world.

The R84 billion “new city” in Modderfontein, Johannesburg has started construction despite widespread skepticism and criticism. According to The Business Report work has started on a small scale in the new “city” of Zendai being developed in the area with the first set of 300 residential units and some of the roads are under construction.

Zendai South Africa chief operating officer Du Wenhui said it was a 15- to 20-year project that would see between 30 000 and 50 000 housing units of different types and sizes, ultimately housing about 100 000 residents.