‘…cultural factors seem to be more pronounced because most identified issues are associated with the way of life, or reactions to urbanisation’

Air and water pollution is rapidly becoming a problem in Nigeria.  Population increase coupled with inadequate planning  is speeding up the degradation of Nigerian towns and cities. Oluwatosin Bamidele suggests some interventions that can help curb pollution.

Nigerian cities are witnessing a high rate of environmental deterioration, and have been rated among urban cities with the lowest livability index in the world. Only between 20 to 30 percent of the urban population enjoy decent urban life. One major contribution to this declination is pollution.

A vast majority of urban residents in Nigeria suffer from an inadequate supply of basic infrastructure, they face environmental threats relating to pollution. In the face of this, pressure is put on existing houses and infrastructure, while unsanitary living conditions characterised by filthy environment, unclean ambient air, stinky and garbage filled streets and substandard houses continue to dominate the urban landscape in our big cities. The concentration of more people in urban areas has brought more pressure on the land space for commercial activities, industrialisation and the production and consumption of food. 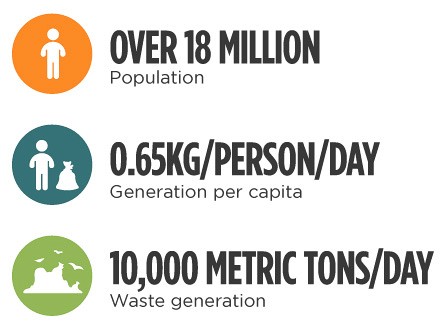 Pollution is not limited to our Nigerian cities, but is a global- scale problem. It disturbs our ecosystem and the balance in the environment. With modernisation and all the development going on in our lives, the effects of pollution are being witnessed; even in cases as obvious as global warming and human illness. Occurring in different forms, pollutants such as liquid waste, organic waste and carbon monoxide are the key elements of pollution in big cities in Nigeria.

Commonly defined as the introduction of foul substances (in the form of garbage, sewage and various types of chemical poisons) into the environment to cause adverse changes, pollutants affect our cities and attack the goal of developing clean energy all around. Excessive burning of fuel seems to be a necessity in our daily lives for cooking, driving, and other industrial activities. We see it in the smoke that comes from factories, discharge from industries producing fuels and mineral resources, vehicles and kitchens. We breathe in these particles everyday and thus, endanger our health, colour of buildings, contribute to global warming and environmental degradation at large.

Industrial wastes dumped into the water system is no doubt one of the causes of severe contamination and an imbalance in the entire food chain, thus severely affecting humans dependent on aquatic food. A lot of health- related hazards such as cholera, typhoid, dysentery, diarrhoea and some epidermal diseases are also associated with water pollution. For example Ilaje, a community where people live on the Lagoon, suffers from oil spillages and dumping of human excreta, solid wastes and debris. It is an unpleasant environment where adults and children are exposed to diseases like cholera.

Lagos has not quite reached the accepted standard of satisfaction in terms of garbage disposal,traffic and pollution control compared to some other large cities around the world. An example is Calgary, Canada, which has a large oil and gas industry and yet has a well planned system of transport that features light rail transit and a grid- like structure that reduces the rate of traffic congestion. They make use of transfer stations, which sort through garbage, and take out the biodegradable and recyclable materials. Honolulu, in the United States, has also been highlighted for the remarkable transit system. There are dedicated bus lanes on the roads, thus promoting bus travel, and reducing exhaust fumes.

In the wake of of the reality of the effects of toxic wastes, in Nigeria some measures have been taken and some policies formed, to make citizens conscious of the issue of pollution. One such law is the Harmful Wastes (Special Criminal Provision)Act, 1988, which makes it an offence for any person to “carry, deposit, dump, or be in possession, for the purpose of carrying, depositing or dumping any harmful waste anywhere on Nigerian soil, in land, waters and seas.” However, this Act has not been implemented successfully and therefore continues to not impact the the way the waste us disposed of.  This year, there has been significant steps taken by the World Bank to assist Nigeria in curbing pollution. For example the World Bank is supporting the Lagos Urban Transport Project that aims to reduce the number of cars on the road. The interventions and laws in place are yet to make a significant dent in the amount of pollution Lagos creates. Therefore more is needed to demand cleaner fuels and safer waste disposal.

Based on the causes of pollution mentioned, these are some of my recommended interventions to curb pollution:

The problem of pollution in Nigeria can be traced to different factors such as climatic and culture. However, the cultural factors seem to be more pronounced because most identified issues are associated with the negligent and unhealthy attitudes and reactions of the people towards keeping a clean environment and living healthily. There is an urgent need to seek workable solutions to the problem of pollution as no section of the urban environment is immune to pollution. If these recommendations are adopted, there is indeed hope for the achievement of sustainable development and an environment where pollution is reduced in Nigerian cities.