Dele Adeyemo recently visited Lagos and rediscovered the emerging and growing creative scene. Together with a team, he is mapping creative spaces via an online crowdsourcing platform.

Whilst on holiday in May 2015, on the eve of the peaceful transition of power from President Goodluck Jonathan to Muhammadu Buhari, I was able to see Lagos for the first time properly as an adult.

Exploring the city on my own, taking the mobile keke maruwa tricycles, packed danfo buses, precarious okada motorcycles and the relative luxury of Uber, I became completely enchanted by the immense range of life in the city. Lagos is a city of universes within universes. I was excited to see that the rumours were true – VI (Victoria Island) and across the vast city, there have appeared pockets of western style hangouts. A heady mix of new bars, clubs and hotels in which I was frequently asked the question, ‘are you looking to re-lo-cate?’, by young, affluent Nigerians who had done the very same thing. Clearly it has become so common that the Lagotian vocabulary has gobbled this word up for its own, in the way only Nigerians can consume language.

This was all worlds away from my previous experiences. I first visited Lagos as an adult in 2007 the same year that Bisi Silva opened the Centre for Contemporary Art, Lagos. I knew nothing of this of course. My experience of the city was a sheltered one, my experience was a sheltered one, family events, church halls, hotel rooms and looking out at the street life from the back seat of air conditioned cars. This is so often the fleeting detached experience of the exiled. 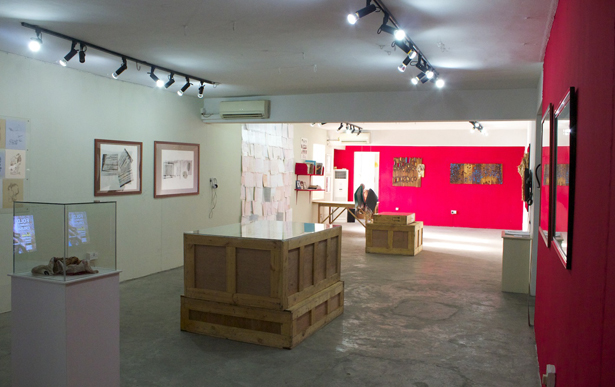 But something changed and Lagos started attracting people back to Nigeria. The Global Credit Crunch that started in late 2007 hitting Western economies hardest, I’m sure played an important part in this. However, something deeper was stirring. In his publication of, Everyday is for the Thief also in 2007, the writer Teju Cole hints at this awkward development:

“It is important for a people to have something that is theirs, something to be proud of… Art can do that. Literature, music, visual arts, theatre, film. The most convincing signs I see in Nigeria are in the practice of the arts. And it is like this. Each time I am sure that, in returning to Lagos, I have inadvertently wandered into a region of hell, something else emerges to give me hope. A reader, an orchestra, the friendship of some powerful swimmers against the tide.”

In his novel, Cole highlights one of the major cultural bastions in Lagos, Jazzhole, and their book, Lagos a City at Work, published under their label Glendora Publications. One of the key contributors to this book was a European, the architect Rem Koolhaas. His research, Lagos Wide and Close, was my first real insight into the immense beguiling beauty of life in this city, the creativity and ingenuity of everyday people, long before I was able to explore it for myself.

Suddenly, there were cultural works emerging, filtering out into the global imagination, enticing the diaspora to return home. First it was Nollywood and then came the Nigerian afro pop scene. Innovative creative images promoted by Lagos Photo Festival and an array of new contemporary art galleries, all adding to a sense that there is plenty here for you.

This shifting of the tide was captured when novelist Chimamanda Ngozi Adichie in her great odyssey, Americanah inverted the narrative and had her heroine dramatically opt not for the classic Hollywood ending but a modern Naija style story instead.

These of course are the perspectives of someone learning about a city from the outside in. But this change has become possible because of the immense creative spirit and production of everyday people. These new creative spaces are helping to shape the city and bring definition to new areas that are appearing all the time and helping to crystallise the creative activities that are taking place around creative hotspots.

When the opportunity to participate in the British Council’s UK / Nigeria Season came about I saw it as a chance to celebrate how Lagos is transforming from A City at Work into a City of Creativity.

The project #CreativeLagos that we are developing at Pidgin Perfect alongside the designer Andy Young who has worked previously in Lagos helping to deliver Culture Shift, is about mapping the important and emerging creative organisations in Lagos, and charting their impact on cultural development. Interestingly it is also becoming a document in how creativity is helping to shape this rapidly expanding city. In a place where new parts of city are rising out of the sand everyday, the creative spaces are beacons helping to create a sense of place and identity. They attract more creative activity around them too and become important incubators of knowledge helping to nurture cultural development and new practices that challenge the way we think and live. In a city the scale, importance and population of Lagos accurate information is really important, but from our research so far it is clear that Google maps can’t be relied on to locate these creative spaces. The beginnings of the Creative Lagos Map

The project lives online in the form of the website www.CreativeLagos.com, providing an open source map that is designed to foster new relationships and collaborations between the UK and Nigerian Creatives. We seek engagement from the public asking three key questions, how has your creative activity impacted cultural development in Lagos?; what are the greatest challenges to the development of your creative activity in Lagos? and what are the greatest opportunities for your creative organisation? The website will be a network of people, places and platforms that will also include a dynamic live social media feed of what is happening in Lagos as well as an open source digital magazine highlighting Lagos as not just one of the greatest cultural producers in Nigeria, but as an artistic forerunner in West Africa and across the continent.   In addition to this CreativeLagos.com will be populated with content from a series of events held in the UK and Nigeria encompassing performance, discussion, and the mapping of creative networks and hubs in Lagos, exploring creative people, their important locations, informal support networks, projects and festivals that breed a creative culture within the city at this pivitol moment in time.

The expansion of the creative spaces across Lagos appears to be gathering pace and becoming self sustaining enabling what Richard Florida has termed as a Creative Ecosystem that is surely set to transform not just the creative economy but the wider economy and society with it. With the city’s youth population exploding, combined with the arrival of the networked potential of smart phones, Lagos Rising is set to continue long into the future.