Sharyn Sassen, a community development consultant, led a research process for Future Cape Town, to gain insights into the everyday social and cultural practices of the people participating in a focussed area of the Bellville CBD. The purpose was to inform future placemaking initiatives with cultural expression integrated into the processes. The initial research raised even more questions around expression, identity and well-being.

The Bellville Scene : Harmony and tension

“…social diversity and multiculturalism have huge social benefits and should remain goals that we aspire toward in our communities” (Putnam, 2009)

The Bellville CBD is comprised of a mixture of foreign nationals (predominantly Somali and Ethiopian people but including people from as far as Bangladesh and Pakistan) and locals. Today, unlike other key business districts in the metropolitan region of Cape Town, Bellville CBD is reputed as a place where diverse ethnic groups live and work harmoniously. The mix ofsocio-economic and cultural representations in the CBD translates to equally diverse interactions with public space.

Our team observed that much of public participation in the CBD’s spaces occurred around informal and retail trading, commuting and, aspects of traditional cultural and religious expressions. Certainly, the CBD is an excellent location for informal trading with its bustling transport nodes, high pedestrian volumes and proximity to local markets for supplies. key spaces like Kruskal Avenue with its plaza feel and the open green space of Elizabeth Park offers place to linger and gather on scattered seating (often informal or unintentional seating). In addition, there are malls, small squares and student hubs where meaningful social and cultural participation can unfold beyond being in transit. Those are the kinds of spaces that could act as ‘micropublics’ where people encounter and negotiate diversity, where different cultures can interact (Ash, 2002).

The potential of the public space offering is exciting. Add this to a harmonious co-existence of diverse communities and surely it’s a recipe for success? Yet, in just a few days of observation the tensions of Bellville’s public life became palpable. While there is tolerance between religious and cultural groups in the CBD, the surrounding suburbs seem to hold misperceptions and negative attitudes about how this mixture of people in the CBD interact with space. On the one hand, the are holds promise of opportunity: opportunity for foreigners to gain entry into Cape Town, for income generation and to make a new home. Yet, our research indicated that foreigners living and working in the CBD found petty crime in the busy trading areas and found accommodation to be over-crowded and expensive. Likewise, the surrounding suburbs see the CBD as dirty and dangerous.

The Bellville CBD may offer great opportunity for social and economic participation for foreigners who live and work there, but ability to access and experience the benefits of this multicultural public life appears tenuous for all.

Urban spaces that affirm people’s identities are important. Imagine what it could mean for public life if future spaces in Bellville reflect the social and cultural identities represented in the area. In order to envision this our research team sought to identify who participates in the focus area and how their participation unfolds in everyday life. Identifying the ‘who’ was straightforward. The challenge was in understanding ‘how’ people participate in relation to their social and cultural values. We also considered connections (or disjunctures) between the ‘who’ and ‘how’: Who is represented here and how is their representation reflected in the interactions we see between people and the environment? A sidewalk near the station bustles with informal and formal trade

Occupational science (a discipline centred around understanding the impact of various productive, social and cultural activities on people’s everyday lives and well-being) offers some useful insights into the role of place in expressions of identity and the implications that has for people’s well-being. Researchers have identified the importance of belonging to the well-being of culturally diverse groups and, that occupations (chunks of meaningful, everyday activities) are a way to express and achieve belonging (Hammel, 2014). Culture and identity reinforce a sense of belonging and the connections between culture, belonging and well-being are forged in place. Public spaces are crucial in creating multicultural communities where the tendency would be for diverse cultures to isolate from one another (Putnam, 2009). The softer issues of well-being and belonging seem to have the greatest impact on people’s attachment to place. Community attachment matters for people’s quality of life but also for economic growth (Nikitin, 2009). An occupational perspective offers this simple argument: the diverse population could commune, belong and build a better Bellville when place enables them to do, collectively, the things that matter to their identity. Space that promotes community association, multicultural engagement and a sense of community attachment can develop social capital of diverse groups and contribute to economic growth. So, the benefits of seeing the Bellville CBD thrive should belong to the CBD’s local and immigrant population, as well as the greater Tygerberg area.

“We could find with consistency over time that it was the softer side of place—social offerings, openness, and aesthetics—that really seem to drive peoples’ attachment to their place. It wasn’t necessarily basic services: how well potholes got paved over. It wasn’t even necessarily for peoples’ personal economic circumstances.” (Loflin, 2013).

Learnings from the study: what place can offer for identity and well-being

A place where people do An important thread from our research findings showed the incredible functional utility of the area to those participating.

At a practical level, the CBD is valuable as a place to do (shopping, trading, eating, meeting, commuting etc). Glimpses of people participating in communal activities in shared space reveals a mutual respect and conviviality. An elderly white couple (who have lived in the area since the early 90’s) who sell Jehovah’s Witness resources in the park have a friendly conversation with a Somali man passing through. On Kruskal avenue Ethopian men sit at a table outside an Ethiopian coffee shop playing chess while a group of local students chat on a bench nearby. The harmonious social and cultural mix is evident and yet, somehow conspicuous against the backdrop of the built environment.

Our findings identified a disconnect between what place offered and the social and cultural interactions described by participants and observed by our team. Experiences of convivial coexistence are fluid and not directly indicative of people’s cohesion with community and space. The CBD provides opportunity to do those necessary livelihood activities but does it offer a place to be and belong for the diverse population? Why do the diverse communities seem conspicuous in space when they are well received and relatively well integrated into the social fabric of the community?

We questioned how this socio-cultural and spatial disconnect might have coloured the lens through which surrounding suburbs perceive the CBD. Our research revealed that the relatively monocultural suburban population, once travelling into the CBD to shop and socialise, tend to stay away from the area. Some complain of feeling unsafe, or out of place (for example, among women in full burkas on the streets) or even annoyed by the loud calls to prayer in the area.

GTP programmes have targeted improving participation of people from surrounding suburbs in the CBD, to enjoy its multicultural offerings. For example, the 12 Mile Food Tour takes visitors to a variety of traditional and local restuarants in the area; A once-off skateboarding event was held to encourage participation of youth who skate in the area. However, the study results advocate for public space activations that promote communal participation of the actual diverse communities within the area. This could bolster a sense of community and belonging that is attractive to outsiders and provides a clear picture of what one might hope or expect to see in the CBD. In fact, the study findings uncovered some of the ways that that different communities have initiated or intended to participate more broadly and collectively in the CBD.

“If Placemaking is project-led, development-led, design-led or artist-led, then it does likely lead to gentrification and a more limited set of community outcomes.” (Nikitin, 2009)

A place where people can be

What kinds of spaces would affirm multicultural identities, where different kinds of people can use the spaces without feeling conspicuous or estranged?

Research observations and interviews showed us that men and women seek opportunities for communal participation around socially and culturally valued activities. Somali men arrange soccer games in the streets at night when the foot traffic dies down. Ethiopian and Somali restaurants become places where locals and immigrants can gather to celebrate and share their cultural heritage. Some of the foreign national groups have formed business, student or religious associations that meet regularly in the area. Immigrants endure over-crowded, expensive accomodation in order to access the CBD whilst remaining connected to others who share their cultural heritage. Despite these obstacles we see intentions to make Bellville home, a place to be and belong.

Through attention to the cultural and social identities that should define place, we envisioned how The GTP might facilitate creative multicultural patterns of use in the area’s public spaces. Any future placemaking that hopes to have real impact on the well-being of the people in the CBD will require community-based participation and a consideration for the occupational lives of these diverse communities.

Considering ‘occupational lives’ involves investigating which kinds of activities are important expressions of cultural identity and which are the meaningful social activities that might help diverse communities feel more connected to other people and the space around them.

Superkilen is a park that supports diversity. It is a world exhibition of furniture and everyday objects from all over the world, including benches, lampposts, trash cans and plants – requisites that every contemporary park should include and that the future visitors of the park have helped to select. 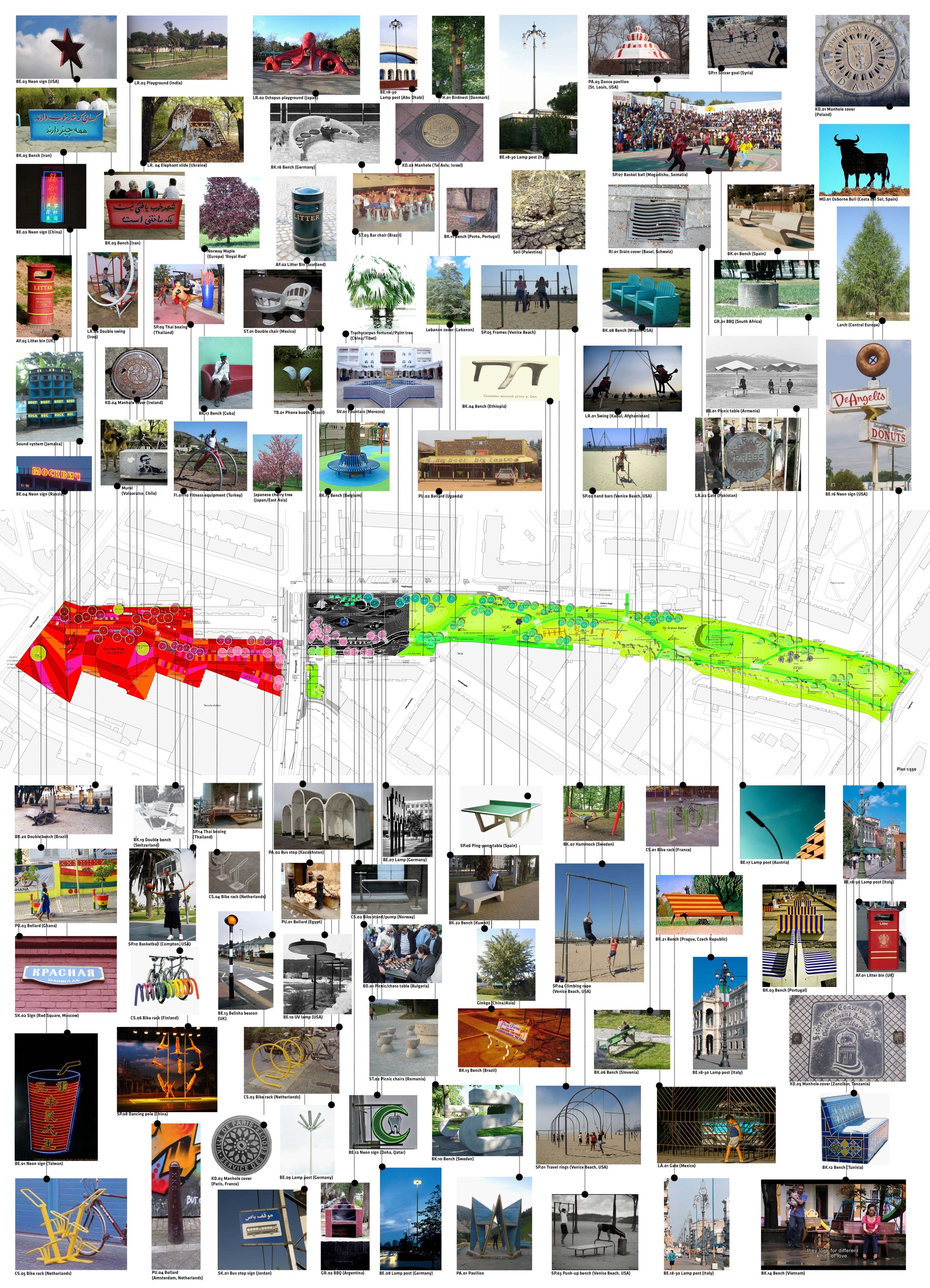 The following recommendations show how creating places for communal and meaningful occupations could affirm social and cultural identities and belonging:

Improve fit between identities and place and promote multicultural participation. The questions and considerations that surfaced during the short period of study have value and application for places across the city. Understanding the kind of occupational engagement that places support or hinder can help planners, placemakers and citizens to transform spaces into places for expression of culture and identity. The concept of what people are able to do in a place and how they are able to be is crucial to maximising the potential of any space for positively impacting human well-being. The thoughts have inspired us towards future placemaking that puts real everyday people at the centre when deciding what makes a place great.

In 2016 Future Cape Town conducted research for The Greater Tygerberg Partnership into the cultural dynamics of public life in the Bellville CBD. The idea was to gain insights into the everyday social and cultural practices of the people participating in a focussed area of the Bellville CBD. The results will be used to inform future placemaking initiatives. The results and full research report can be found here. This article discusses in particular, some of the learnings and questions that surfaced in the study about multicultural participation in place and what this means for community and well-being. Sharyn Sassen, lead researcher for the Bellville study discusses the importance of participation in social and cultural occupations for belonging, the implications this has for well-being and the role of place.