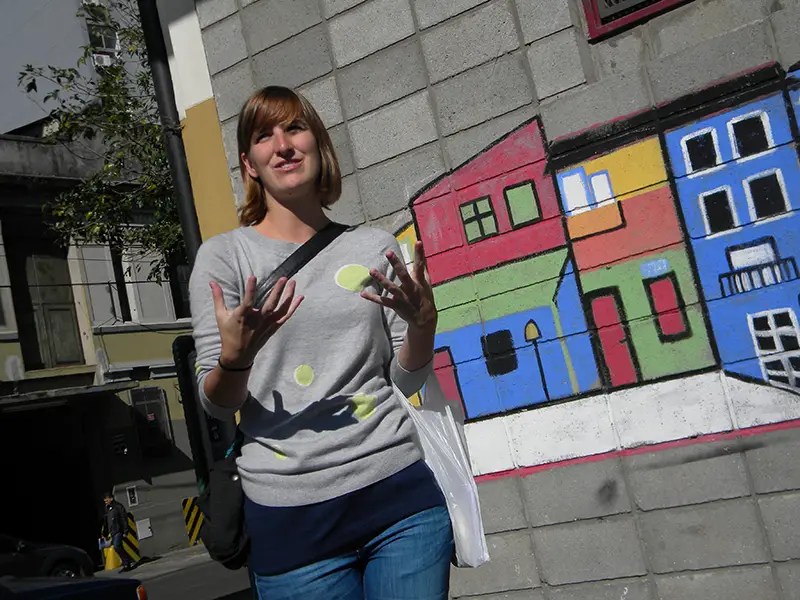 In the urban planning circles of the United States, no historical figure embodies both the historical mythos and current trends that have become so important to the new urbanist movement more than Jane Jacobs. Her story is compelling: a plucky woman with thick glasses, no formal training, and a will of iron mobilized neighborhood forces in Greenwich Village to fight government titan Robert Moses and his plan to tear through the neighborhood with a new freeway – and won. Today her thinking is credited with eventually pulling New York City out of its Taxi Driver slump in the 60s and 70s and making it the dream city of all 20 somethings fresh out of college nationwide, and her book The Death and Life of American Cities is considered a classic.

But how does her ideology apply to other regions with their radically different cultures, federal policies, and urban fabric? On this previous edition of international Jane Jacobs walk day, I set out with a group of urban thinkers on a walking tour to find out what Jane Jacobs meant for Buenos Aires, a hemisphere away from her home turf in the Village.

Our tour began in Palermo, a neighborhood that locals never tire of describing as “a really bad area 20 years ago.” But the only way I’ve ever seen it is in its current form as ground zero for gentrification. Today, gentrification is a big deal in the US – partly due to a more commercialized interpretation of the ideas originally expressed by Jacobs – but in Latin America it’s a little known trend only experienced in the largest cities. In the US, gentrification represents something quite different. In most US cities, density had for decades been synonymous with poverty, as anyone who could afford to leave dense areas did so. Gentrification in the US represents shifting attitudes by elites in favor of dense zones. On the other hand, dense zones in Latin America have always retained a significant elite population, so gentrification in this area isn’t a question of elites moving into dense zones so much as from one dense zone to another.

Our guide is a perky architect by the name of Carolina Huffmann. We set out walking an she begins by explaining to us who Jane Jacobs was, and what her core ideas for good cities wore, small blocks, density, diversity of uses, and the preservation of old not necessarily historic buildings. She also describes how she accidentally discovered the importance of Jane Jacobs while studying architecture in Barcelona: “I started out by simply designing buildings, and then it eventually became apparent that you cant just design a building without understanding the space around it.” An idea fundamental to the urban thinking of Jane Jacobs.

We walk south through a few of the last ungentrified – or at least less gentrified – blocks left in Palermo. The architect-heavy tour group quickly begins to ask very informed and specific (read: nerdy) questions. One man explains that he lives here in the neighborhood and the whole place has been totally mucked up by condo developers. Carolina agrees, despite having cited Jane Jacobs call for density earlier, because of the fact that builders often lobby for greater density in neighborhoods without also implementing sufficient sewage or transportation infrastructure to go with it.

There are several ideas that appear in Jane Jacobs’s seminal classic the death and live of great American cities, that – as the title would imply – are only relevant to urbanism in the US. The book introduces itself as “an attack on current urban planning practices in this country,” and goes on to, among other things, catalog the woes of the 1949 US Housing Act, the Interstate Highway Act, and Robert Moses’s coarse application in New York of the ideas of Ebeneezer Howard and Le Corbusier – ideas she saw as erroneous in the first place.

Despite this narrow focus Carolina finds her ideas to be perfectly relevant in Buenos Aires. “Jane Jacobs is universal,” she tells me. “The street vendors in Palermo, for instance, don’t depend on the police to determine where to set up. They use the same principle Jane Jacobs describes: busy sidewalks have more people watching them, and are ultimately safer.” In fact, she thinks that in some ways South America’s cities are more “jacobsian” than North American Cities. “You yanquis, and the Europeans too, live in bubbles. You never come into contact with poor people if you’re middle class. Your lives are vey sanitized,” she tells me. “Here, life is more unpredictable. But that’s exactly what Jane Jacobs thought was so wonderful about cities. That’s what she wanted cities to be.”

We cross from Palermo into Chacarita, an as-yet ungentrified middle class neighborhood famous for its cemetery. The guy from Palermo looks around and mutters grimly, “Soon this place will look like Palermo does now.”

We walk into a park and Carolina hands out a clump of small papers to each person, each with a quote from Jane Jacobs, translated into Spanish. Mine all have the same quote. Las ciudades tiene la capicidad de proporcionar algo para todos, solo porque y solo cuando, son creadas por todos. Cities have the capability of providing something for everybody, only because, and only when, they are created by everybody. “These are to put tape on and post around the city.” Carolina explains. I wonder if Jane Jacobs would consider taping up flyers as being part of “A city created by everybody.”

Our last stop is a uniquely Argentine take on this Jacobs quote. It’s a worker run co-op called “The Warehouse” located in (you guessed it) a warehouse, next to the Lacroze train station. The manager – yes, even workers coops have managers – comes out to talk with us about the place.  ”we grow our own food on site, and everything is totally organic.” She also went on to say that the group actively participates in political issues, though it isn’t affiliated with any party. There are hundreds of similar worker run enterprises around the city, a phenomenon that sprang up after the economic crisis of 2001. Jane Jacobs has little to say specifically about this form of management in her books, but it dovetails with her vision of a participatory city. If democratically structured groups that undertake the task of maintaining buildings and other elements of the urban fabric, and in old buildings to boot, even better.

After the tour, Carolina gives out some tape to use with the quote flyers. On my way out, I tape up one of the in a plaza near the train station. As I walk away, an old man stops to read it. I doubt he knows who Jane Jacobs is, but without realizing it, he’s spent his life living in a city that’s not that different from what she envisioned.