In 2008 the world hit a turning point with over 50% of the world’s population now living in cities. That means that the human population is predominantly urbanised mainly due to an increasingly global economy. Most of us have also sensed that our world is becoming increasingly smaller and interconnected. Where once human capital was the engine that kept the urban wheels turning it is now our cities that are keeping the global wheels turning requiring ever more resources, creativity and innovation to oil the global machine of economic growth. The pressure is now mounting on cities to attract and retain an edge in order to remain economically competitive in a shrinking world.

Our cities are constantly being ranked for liveability, happiness, cultural capital and creativity. However it is constant innovation that stands out as the key stimulus for longevity in economic competitiveness. Where some cities have gained recognition in innovation through short term booms such as Silicon Valley and Detroit Michigan, the more dominant cities, with longevity have gained and retained prominence over time maintaining recognition in their continuous innovations such as London, Paris and New York. So what ensure the longevity of these cities and how are other cities now making headway in the Innovation City ranking?

The surprising main stayer that has dominated these rankings over the last few years is Boston. The university city that is known for its diverse cultural assets, being one of the oldest cities in the US. In the top 20 Innovation Cities are the usual major cities such as Paris, New York, Vienna and Munich but surprisingly new comers are increasingly inching their way up the ranking such as Seattle whilst other long term innovation cities are dropping down such as Barcelona, Milan and Tokyo. Cape Town is categorised as being an emerging innovation city and is currently ranked 119th just below Bilbao Spain, Wellington New Zealand and Sao Paolo Brazil. Surprisingly Cape Town is ranked well above Dublin, the capital of Ireland and Canberra, Australia’s Capital City. So what makes and Innovation City?

While it is true that human infrastructure, mobility and industry in conjunction with access to a robust networked market is seen as key by governments worldwide, many a planning department has underestimated the real value in cultural assets. In fact some experts such as Richard Florida would argue that there is more to cultural assets than one would think.

Cultural centres involve gathering and exchange places for arts, music, sport and food. Many a business idea, invention, innovation and partnership have been sparked within innovation cities’ cultural assets. Whilst there is recognition that globalisation is homogenising the world’s many diverse cultures such as through the pop culture phenomenon, there seems to be a global resurgence of localisation and a fresh recognition of the value in diversity and cultural heritage and ultimately fostering distinctiveness. This is evident in the resurgence of the old and the formation of new clusters of creative and knowledge industries that are emerging throughout the world’s cities creating a competitive edge upon which a city can climb the rating scale as an emergent innovation city. 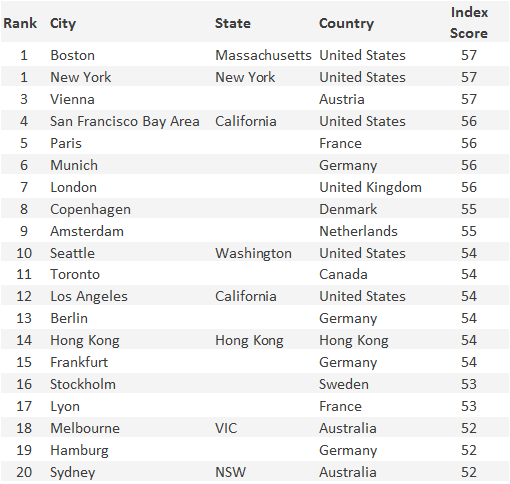 Feature image: by joiseyshowaa at flickr.com